Scott tied for lead at Australian PGA after 3 rounds 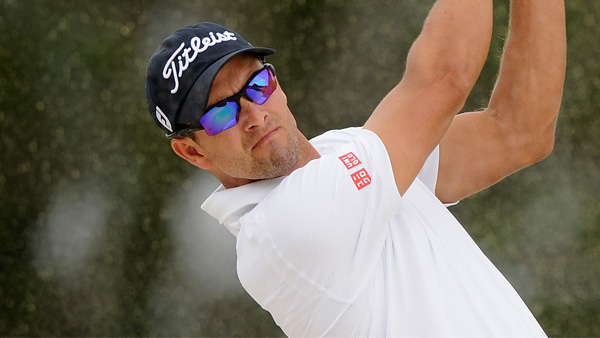 GOLD COAST, Australia — Defending champion Adam Scott and fellow Australians Scott Strange and Wade Ormsby were tied for the lead after three rounds at the Australian PGA championship, with American Boo Weekley one stroke behind.

Scott shot a 3-under 69 on Saturday while Strange and overnight leader Ormsby had 71s for 54-hole totals of 10-under 206 on the Royal Pines resort course.

Weekley, playing in Australia for the third time in four weeks, also shot 69 and was tied for fourth with Australian Jason Scrivener, who shot 68. Weekley provided one of the shots of the day when he chipped in for an eagle on the par-5 12th.

American Scott Stallings shot 68 and was tied for seventh, four strokes behind.

Australian Jarrod Lyle, back playing regularly after recovering from his second bout of leukemia, shot 70 and was in a group tied for ninth at 5-under, five behind.

Strange was ahead by a stroke with two to play but a bogey on the 17th dropped him into a tie with Scott. Ormsby made a long birdie putt on the 18th to join them in the lead.

“It was tough conditions so on a day like today it’s less frustrating to see a few slide by because most people are struggling,” Scott said. “Scoring wasn’t great today … I kind of got away with that. If that’s the case tomorrow, then I’ll probably not win.”

For that reason, Scott said he’ll try to get off to a quick start.

“It’s the best thing I can do for so many reasons to give myself the advantage,” Scott said. “Whether it’s a-crowd cheering perspective or just a rhythm of the tournament perspective. Any of these guys can get off to a good start and there’s no reason why not.”