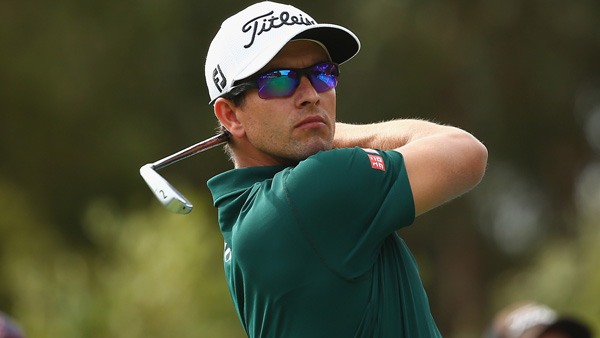 MELBOURNE, Australia — Defending champion Adam Scott struggled in the blustery conditions at Metropolitan Golf Club on Thursday for a 1-over 73, six strokes behind a group of four of his countrymen who led the Australian Masters by a stroke after the first round.

Scott, who won the Masters the past two years at other sand-belt courses – Royal Melbourne and Kingston Heath – began play on the back nine Thursday and shot 38, including a double-bogey on the 18th after his approach found a bunker. But an eagle on the par-5 sixth helped move him back up the leaderboard.

“A strong northerly (wind) from the get-go was always going to make it tough,” Scott said. “I played pretty well but didn’t take any of my chances. I’m a little behind the eight-ball at the moment but it’s nothing a good round tomorrow won’t fix.”

Bowditch, who won the Texas Open in March for his first U.S. PGA Tour win, had the outright lead until making bogey on his last hole.

“I knew I’ve been playing OK,” said Bowditch, who also finished second in last month’s Frys.com Open. “I’ve been a bit sort of up and down with my putting but my game itself seems to be pretty consistent over the last sort of two years.”

Geoff Ogilvy shot 69 and was in a group tied for seventh with American Kyle Stanley. Americans Zac Blair (70) and Boo Weekley (72) were just behind them.

Ogilvy, who grew up in Melbourne and knows all about the vagaries of the city’s weather, said he was prepared for a challenging day.

“That’s about as tough as Melbourne can provide weather-wise,” he said. “The early tee time, you see the forecast last night, northerly, you’re like hopefully it doesn’t start picking up and we get a few holes without it coming, but it was windy from the first hole. But I hit the ball better and better as the day went on.”

Wright said it was like the “wild west” but the wind suited his game, with back-to-back birdies on the eighth and ninth holes.

“It was brutal out there,” the 40-year-old Brisbane golfer said. “I hit the ball underground, really low, so it’s suits me to a tee.”

Canada’s Riley Wheeldon opened with a 1-under 71 and sits tied for 24th after round 1.