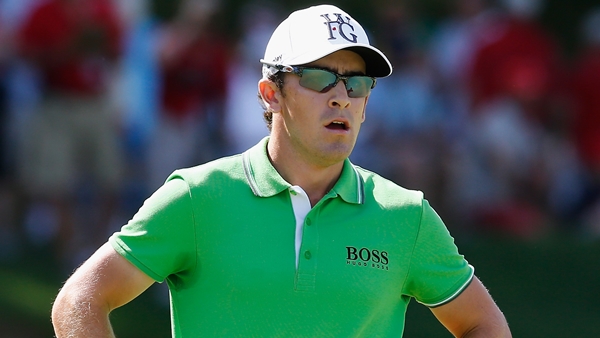 CROMWELL, Conn. – Scott Langley is being careful not to get too far ahead of himself in the Travelers Championship. That’s the mistake he said he made three weeks ago at the Memorial Tournament when he shot a 79 in the final round to drop into a tie for 28th.

Winless in two seasons on the PGA Tour, the 25-year-old Langley took the second-round lead in the Travelers on Friday, following his opening 64 with a 65 to reach 11 under 129. He had eight birdies, a double bogey and a bogey in the second round at TPC River Highlands.

Michael Putnam, Harris English and K.J. Choi were a stroke back. Putnam shot 63, matching the best round of the day. English had a 64, and Choi shot 65.

Langley was 11 under after 10 holes Friday, but an errant approach shot on the 342-yard, par-4 second hole led to a double bogey.

“I was ticked off because it was such an easy mistake, a simple wedge shot,” said Langley, trying to become the fifth straight first-time PGA Tour winner in the event.

Langley birdied the next hole.

I’ve given myself a lot of short birdie opportunities the first two days. Those are nice,” Langley said. “When you start adding up three, four and five almost tap-in birdies, that just really kind of boosts you up.”

First-round leader Brendan Steele had a 69 and to top the group at 9 under. He made three bogeys on his first nine holes, but rallied with four straight birdies on Nos. 3-6.

Defending champion Ken Duke was 3 under after a 72.

Masters champion Bubba Watson, the 2010 Travelers winner for his first PGA Tour title, followed his opening 67 with a 72 to make the cut by a stroke.

Putnam has finished in the top 25 once in 22 events this season. He matched his season best with a 67 in the first round and bettered it significantly Friday with the 63.

“It was a perfect day for scoring. It left myself in some good spots and made a couple putts,” Putnam said. “I actually three-putted 13 for par so it could have been even better.”

Defending champion Ken Duke was 3 under after a 72.

“I hit a lot of bad shots and I have no excuse for it, but yeah, it’s good to finish strong and be here for the weekend,” Duke said. “That’s what you always want to do.”

Erik Compton, the two-time heart transplant recipient who tied for second Sunday in the U.S. Open, missed the cut. He had a 69 in the second round to finish at 3 over.

Also missing the cut was Brad Fritsch. The Ottawa native opened with a 65 Thursday, but faltered with a 76 during round 2.

Weyburn, Sask.’s Graham DeLaet will play the weekend. He’s 2-under for a 68 on Friday.