Scores soar at US Open 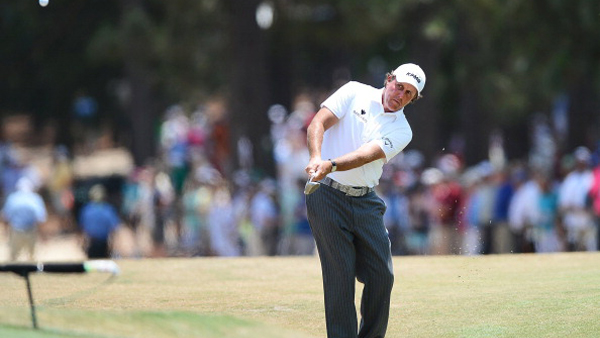 After two days of lower-than-expected scores, the U.S. Open finally showed its bite at Pinehurst No. 2 on Saturday.

With no rain to soften the perilous turtleback greens and devious pin placements making it tough to get anywhere close to the flags, the storied course produced the sort of portly numbers that had been expected from the beginning of the tournament.

Martin Kaymer was set to tee off in the final group with a six-shot lead after posting consecutive 5-under 65s. That gave him the lowest 36-hole score in Open history and was tied for the lowest at any major championship

It was hard to envision him going that low again in these conditions, considering the greens were firming up even more on a warm, sunny afternoon. No one broke par among the first 18 players to finish.

Matthew Fitzpatrick, the only amateur to make the cut, settled for a 78 after shooting 71-73 over the first two rounds. He said the tee placements were also making things tough.

“A couple of tees are forward, but the ones that are forward on, they really don’t make too much difference,” the 19-year-old said. “But there’s a few that are back, and they make a big difference.”

The only player who seemed to be enjoying himself: Kenny Perry, who holed out an eagle from the waste area at No. 14.

Kaymer appeared to be playing an entirely different course over the first two days, making 11 birdies and only one bogey.

Brendon Todd was the closest challenger, Kevin Na and Brandt Snedeker faced a seven-shot deficit, and only nine other players went into the third round closer than 10 strokes behind.

The six-shot lead at the midway point tied the U.S. Open record first set by Tiger Woods at Pebble Beach in 2000 and matched by Rory McIlroy at Congressional three years ago. Woods wound up winning by 15 shots. McIlroy won by eight.

“I played Congressional and I thought, `How can you shoot that low?’ And that’s probably what a lot of other people think about me right now,” Kaymer said.

Phil Mickelson steadied his putting stroke a bit, playing the first 13 holes Saturday at even-par – a solid round on this day, but likely not the sort of score he needed to get in contention for his first U.S. Open title.

Lefty has been the runner-up in this championship a record six times, denying him the only title he needs to complete a career Grand Slam.