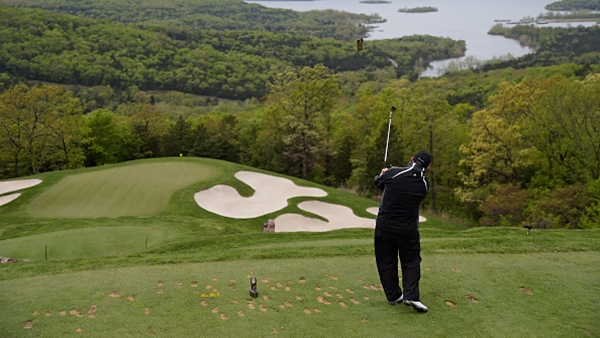 Woosnam and Lyle grew up about 20 miles apart, with Lyle in Scotland and Woosnam in Wales. They birdied five of the last six holes in windy conditions.

“I think I played very little part in it today, sad to say,” Lyle said. “But Woosie’s play was a huge rock. He always looked like he got the ball under control. And the few times that he was just slightly out, I managed to come in with a few pars, and then I birdied 17 at a good time when we were needing a bit of a boost. So, a strong finish made all the difference to the round.”

Former Ohio State teammates John Cook and Joey Sindelar were tied for second with Corey Pavin and Duffy Waldforf. Cook and Sindelar, the first-round leaders after a 60 on the regulation course, had a 53 on the par-3 layout. Pavin and Waldorf shot a 53 on the par-3 course.

“It gets looking ugly in a hurry and you can see by the scores,” Sindelar said. “I mean, it’s just tough to do. The wind, this much wind, it starts affecting the putts.”

In the Legends Division for players 65 and older, Larry Nelson and Larry Fleisher had a four-stroke lead at 11 under. They had a 66 at Buffalo Springs after opening with a 47 on the par-3 course.

“I thought it was a very difficult day,” Fleisher said. “The wind really played havoc. The golf course the way they had it for us was very, very short and it was almost – almost played against us because we’re going with the short irons and, with all this wind, it’s hard to control the spin.

“But Larry and I kind of dodged each other and got through it.”

Jack Nicklaus and Gary Player were tied for second with Butch Baird and Al Geiberger. Nicklaus and Player had a 66 on the regulation course, and Baird and Geiberger shot a 49 on the par-3 course.

The Legends Division will close Sunday with nine holes of better ball on the par-3 course.