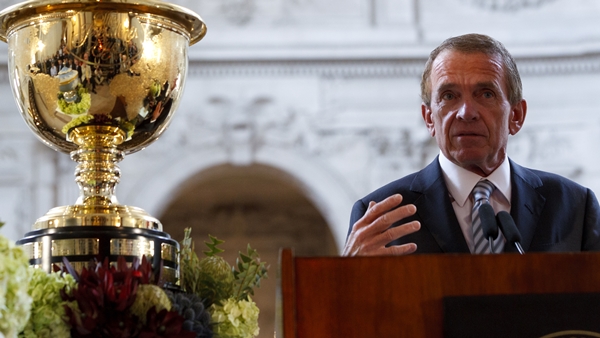 SAN FRANCISCO – The southwest corridor of San Francisco is going to get all the golf it can handle over the next decade.

TPC Harding Park will host the Match Play Championship in 2015, the PGA Championship in 2020 and the Presidents Cup in 2025. The announcement was made Wednesday by PGA Tour Commissioner Tim Finchem, PGA of America President Ted Bishop and San Francisco Mayor Ed Lee at a swanky City Hall news conference.

Speaking on the second-floor balcony outside the mayor’s office to a crowd that included about 100 leaders and golf officials, Finchem said the coordination between the PGA Tour and PGA of America to stage all three events at the same venue is unprecedented. He said he hopes similar collaboration can be done in the future to benefit both organizations and their fans.

“Today is an announcement of a lot of firsts,” Finchem said.

The trio of tournaments adds to an aggressive schedule in the area.

The Swinging Skirts LPGA Classic, which was held on the last weekend of April this year, is set to return to Lake Merced just down the road in Daly City in 2015. And the inaugural U.S. Amateur Four-Ball Championship is scheduled from April 30 to May 6 at The Olympic Club, where the U.S. Open was last held in 2012.

Organizers are counting on the sports-saturated Bay Area market – loaded with corporate dollars from San Francisco to Silicon Valley – to provide support behind the ropes and on sponsorship banners.

The PGA Tour’s commitment to hold the Match Play at Harding Park is only for one year. The tournament had typically been held in February the past eight years at Dove Mountain outside Tucson, Arizona. But the PGA Tour’s contract with title sponsor Accenture ended after this year’s event, leaving the event’s future uncertain.

The tournament is set for April 29 to May 3 – the week before The Players Championship – next year to improve the chances of dry conditions at Harding. The title sponsor for the 2015 tournament remains unclear.

The Match Play’s debut at Harding also will feature a new format. The tournament will have a similar structure to the World Cup, with group play leading into single-elimination matches.

The reconfiguration will ensure that all 64 players – determined by the Official World Golf Ranking, as in the past – are around for at least three days. Previously, single-elimination from the outset often led to quick exits for top players and fan favorites.

“It’s a lot more golf,” Finchem said. “It’s a ton of golf. We know the fans here will relish the opportunity to have that much more golf.”

Finchem, Bishop and Lee all credited Frank “Sandy” Tatum for bringing the events to Harding. Tatum, a longtime San Francisco attorney and former president of the U.S. Golf Association who turns 94 on Monday, spearheaded a renovation of the course and clubhouse, which now bears his name.

Finchem also quoted players such as Tiger Woods and Phil Mickelson as being excited about the announcements. He said Johnny Miller told him he honed his famed putting skills on Harding’s practice greens.

Bishop said there was never any discussion of holding the PGA Championship at another club in San Francisco, which has never hosted the event. He also said the season’s final major in 2020 might also be reworked on the schedule because of the Olympics that year.

After going more than 40 years without being played on a public course, the PGA Championship is now headed to two in a row.

The 2019 event will be played at Bethpage Black on New York’s Long Island. The last PGA Championship on a municipal course was in 1974 at Tanglewood Golf Course in North Carolina.

The PGA Championship has not been played on the West Coast since 1998 at Sahalee Country Club outside Seattle. The 2020 event at Harding Park also gives California majors in three consecutive years, with the U.S. Open going to Pebble Beach in 2019 and Torrey Pines in 2021.

Harding Park has never hosted a major, but it was the site of the 2009 Presidents Cup won by the U.S. The Presidents Cup features 24 of the world’s top golfers – 12 from the U.S. and 12 from around the world, excluding Europe – in a team match-play competition.