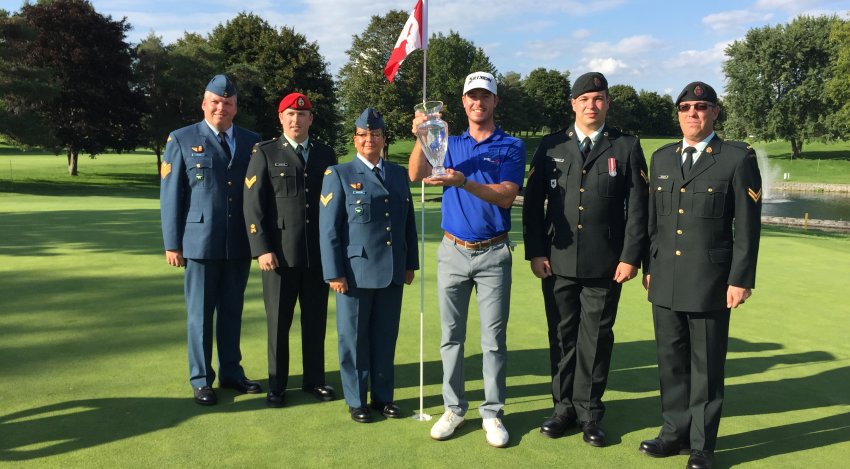 The win moves Ryder to second position on the Order of Merit with four events to go in the 2015 season, in position to earn status on the Web.com Tour for next season.

“I’m at a little bit of a loss for words right now, but it feels really good,” said Ryder.” I was already in great shape and had some really solid finishes this year. This feels really good and I think it solidifies myself as one of the contenders out here for sure.”

Ryder and Pendrith began the day tied for the lead, and went back-and-forth for much of the day, trading birdies, with both players shooting bogey-free rounds of 5-under 66. After returning to the 18th hole for a sudden-victory playoff, Pendrith had a 10-foot birdie putt to win, but hit it through the break and missed a short comebacker to make bogey.

A four-foot par putt was all that separated Ryder from his first Mackenzie Tour win, and the Stetson University grad poured it in to secure the title.

“It was hard to watch the [Pendrith’s] birdie putt. Honestly, I just wasn’t expecting him to miss that second one. I didn’t really want it to end like that, but I’ll take it,” said the 25-year old Ryder, a second-year member on the Mackenzie Tour. “You couldn’t really draw it up better than the way we went back-and-forth all day with no bogeys through 18 regulation holes. It was just a lot of good golf from both of us, and a lot of pressure and a lot of fun.”

“It’s unfortunate that the first bogey of the day had to come in a playoff, but that’s the way it goes,” said Pendrith, a member of Golf Canada’s Young Pro Squad. The 24-year old moved to seventh on the Order of Merit with his second playoff loss of the season. “I take a lot of positives away. Played really good and made a lot of putts. I’m feeling really confident with my game. It’ll be good moving forward. Anytime you’re in a playoff or in contention on Sunday you’re always happy, it’s just unfortunate.”

For Ryder, who entered the week 11th on the Order of Merit, the win affirms what has been a breakthrough season, with three prior top-10 finishes.

“Until you win, you don’t know for sure. You assume your game’s good enough and you get yourself in contention, but until you actually finish it off and close the deal, you don’t really know. It’s nice to get a little monkey off my back,” said Ryder.

Otsego, Minnesota’s Clayton Rask briefly tied the lead at 19-under with a birdie on the 14th hole before finishing solo third at 18-under.