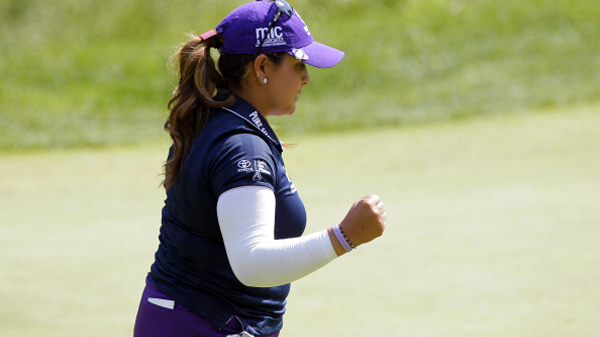 WILLIAMSBURG, Va.– Lizette Salas won the Kingsmill Championship on Sunday for her first LPGA Tour title, finishing with even-par 71 for a four-stroke victory.

The 24-year-old former Southern California player was never really challenged in the final round on the River Course. She started the day with a three-shot lead and doubled it with birdies on the par-5 third and par-3 fifth. A bogey on the par-4 eighth was her only hiccup – and only her third bogey in four rounds – until she three-putted the par-3 17th.

Salas, who has had several near misses, cupped her head in her hands and covered her face in celebration after the final putt fell, but her winning moment was quickly interrupted by a champagne, water and wine shower from fellow competitors.

“I was patient, I was happy, and I was ready most importantly,” she said on the green. “I took a different approach this week of not thinking so much and trying to be perfect.”

This year, Salas tied for third in the season-opening event in the Bahamas and shared the lead after three rounds in the Kia Classic in California, but Anna Nordqvist closed with a 5-under 67 to win by one.

Last year, playing alongside winner Inbee Park in the final group of the Kraft Nabisco, Salas shot 79 to tie for 25th. Two weeks later, Salas lost a playoff to Suzann Pettersen in the LPGA LOTTE in Hawaii. Salas chunked her approach into the water on the first extra hole after closing with a tournament-record 62.

Yani Tseng, seeking her first victory since 2012, got within three with three birdies in a four-hole stretch on the back nine, but she finished with two pars and a double bogey for a 69, expanding Salas’ lead to five shots.

Tseng tied for second with Kraft Nabisco winner Lexi Thompson and Sarah Jane Smith. Thompson had a 69, and Smith shot 66 – the best round of the day.

Tseng nearly made it very interesting at the par-5 15th, but her eagle putt stopped just short of the cup.

Alena Sharp finished as top Canadian. The Hamilton, Ont. native finished 5-0ver and tied for 60th. Lorie Kane was a shot back at 6-over. She tied for 62nd. Maude Aimee LeBlanc finished 74th at 11-over.