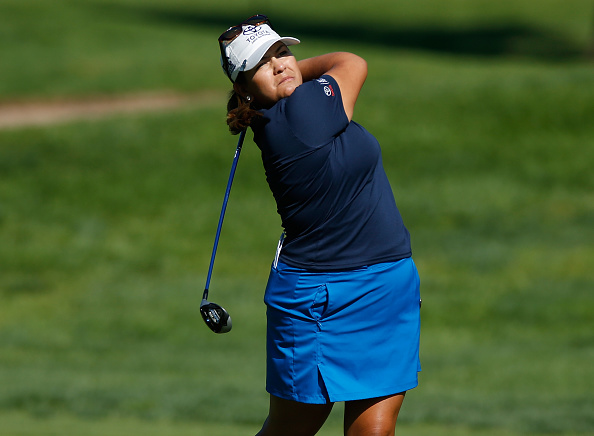 BELMONT, Mich. – Lizette Salas built on her strong finish two weeks ago in the U.S. Women’s Open in the first round of the Meijer LPGA Classic.

The 26-year-old former Southern California player shot a bogey-free 7-under 64 on Thursday at Blythefield Country Club for a share of the first-round lead with Katherine Kirk and Dori Carter.

In the Women’s Open in Pennsylvania, Salas finished with a 68 at difficult Lancaster to tie for 14th – her best finish since tying for 11th on Phoenix in March.

“My finish at the (U.S. Women’s Open) kind of gave me that extra boost of confidence to really go low and that’s what I did today,” Salas said.

“The rough is pretty gnarly, but I kept the ball in the fairway,” Salas said. “The eagle on 11 got me going and really helped me target the pins. I stayed aggressive with my putting and it is really coming along.”

She won the 2014 Kingsmill Championship for her lone tour title.

Jaye Marie Green and rookie Wei-Ling Hsu were a shot back in the second-year tournament.

Michigan-born Kris Tamulis was at 66 along with Q Baek, Ilhee Lee and Jane Rah.

Top-ranked Inbee Park, who lost to Miram Lee in a playoff last year, had three front-nine bogeys in a 70. Chella Choi, the Marathon Classic winner Sunday in Sylvania, Ohio, opened with a 71.

Kirk, a two-time tour winner, had her best round of the year. The Australian had two bogeys, but made seven birdies and also had an eagle on 11 after reaching the green in two.

“We had perfect conditions this morning, hardly any wind and then greens were very receptive early on,” she said. “I’m really happy. I haven’t posted a round like that in a while so it feels good to finally get the rust off and shoot a low one.”

Carter, winless on the tour, tied her career best with the 64. She had three straight birdies in a front-nine 5-under 31 and said on-going work with Gail Peterson is paying off.

“We’ve put a lot of work in, even here this week, and today the putts finally fell,” Carter said. “You know, I’m comfortable. I’m getting more experience and I like being here. I want to continue to stay on the top of the leaderboard. The more I can get this experience, the better.”

Miram Lee withdrew after the pro-am Wednesday, citing a left wrist injury that she said will also keep her out of the Women’s British Open next week.