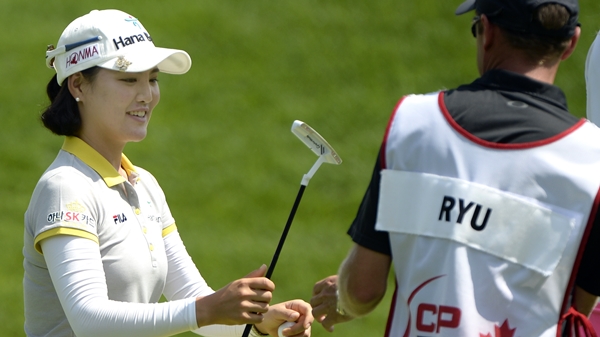 LONDON, Ontario – So Yeon Ryu pulled away from the pack at the Canadian Pacific Women’s Open with a second straight bogey-free round.

Ryu shot a 6-under 66 Friday at London Hunt and Country Club to get to 15 under, the best two-round start in the tournament’s history and five strokes ahead of fellow South Korean Na Yeon Choi, playing partner Anna Nordqvist and Danielle Kang.

“A lot of birdies is still a good sign, but no bogeys is more (of) a great sign because it means I play really consistent and when I was in trouble I handled it pretty well,” she said. “That’s my goal. I aim for the bogey-free round all four days.”

If Ryu keeps it up over the weekend, she’ll have a good chance at winning her first tournament since the Jamie Farr Toledo Classic in 2012. With eight top-10 finishes this year, including a tie for fifth at the U.S. Women’s Open, she hasn’t been far off.

Even amid her victory drought, Ryu tries not to complain or worry.

“I’m happy to be just travelling all around the world,” she said. “I’m really happy to show my golf swing and my golf game to all golf fans. The thing is to not really think about the result thing. I’m playing golf and I’m happy.”

Ryu “absolutely” is happier when playing the kind of golf she has over the past couple of days. She returned to the same local restaurant, Izakaya Shogun Japanese Sushi & Grill, Thursday night that she had dinner at with South Korean teammates the previous day _ for takeout this time _ and said she’d have to think about it again before her third round.

Whatever Ryu is eating, the rest of the field will have what she’s having.

“So Yeon is probably making everything she looks at,” said Cristie Kerr, the champion the last time this tournament was in London back in 2006, who shot a 4-under 68 Friday to get to 9 under.

American Brittany Lincicome, who was a runner-up to Inbee Park at last week’s LPGA Championship, had the best round of the day with a 65 to move to 8 under. Lincicome said her confidence level was “really high.”

“I felt really confident when I stepped on the first hole,” she said. “It was a very smooth day and it was nice to get some putts to fall.”

Four Canadians were among the 87 players who made the cut: Jennifer Kirby of Paris, Ont., at 5 under and amateurs Brooke Henderson of Smiths Falls, Ont., and Jennifer Ha of Calgary at 3 under and Sue Kim of Langley, B.C., at 1 under. The other 11 in the field finished at even or over par to miss.

Henderson had missed the cut in this tournament in her two previous appearances but is now 4 for 4 making the cut in LPGA Tour events this year. But she wasn’t satisfied despite shooting a 71.

“Honestly, today, I could’ve easily been five-under,” Henderson said. “I had so many opportunities for birdie inside 10 feet and just didn’t capitalize on them.”

Nordqvist felt the same way playing with Ryu but struggling with her putter.

One of the last players to tee off Friday, Kang saw Ryu’s 15 under and didn’t let it bother her. Instead, she watched the leaderboard with delight thinking about what she can do on this course.

“That tells me that there are birdies out there,” said Kang, who borrowed defending champion and friend Lydia Ko’s ball marker after forgetting her own. “You just got to go by the scoreboard, the scoreboard tells you everything you need to know.”

Like a lot of players, Choi wasn’t focused on others’ performances before she teed off. The 2012 U.S. Women’s Open champion also took a different approach Thursday night after shooting a 64, going shopping and to the movie theatre to see “Into the Storm.”

“I just tried to relax,” Choi said. “Always when I think about too much golf, even off the golf course, it sometimes gives me a lot of stress.”

Choi stressed about her driver after shooting a 70 Friday to tie Nordqvist for second. It’s her hope that fixing a left hook in her swing can help her stay in the hunt.

Kang, a 21-year-old from San Francisco, is in contention and feeling confident going into the weekend.

“There’s a lot of people contending, and there’s a lot of birdies out there and everyone’s shooting low, so you’ve just got to keep making birdies,” she said.

American Jessica Korda had a hole-in-one on the eight, drilling an 8 iron from 147 yards from the tee. She shot a 70 to get to 4 under through two rounds. … Organizers waived the $10 parking fee for the weekend to encourage more fans to come out to the course.