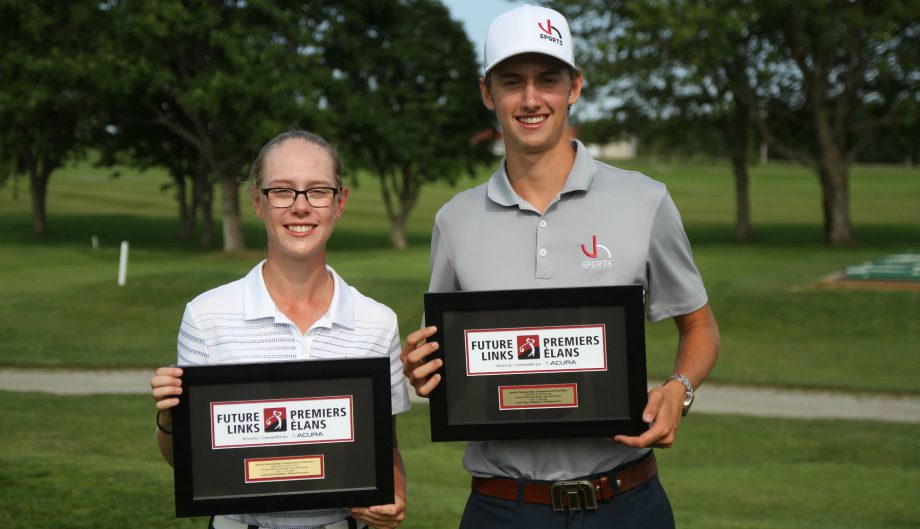 Ross shot a 3-under-par 68, his second sub-70 round of the competition. The 18-year-old from Fredericton, N.B., went bogey-free during his final round and finished with a two-stroke lead.

“The win feels great,” he said, after the award ceremony. “I didn’t get off to the best of starts this summer. I lost a few that could have had and it feels good to win here at the Atlantic championship again.”

Aubrey Farrell finished in second after starting the day tied with Ross at the top of the leaderboard. The 18-year-old from Sydney Forks, N.S., fell three strokes behind Ross by the sixth hole, and his two birdies the rest of the way were not enough to catch back up. He finished at 3 under for the tournament.

Finishing in third place, well back from the top two, was Andrew Bruce from Corner Brooke, N.L. The 18-year-old carded seven bogeys and just one birdie during his final round and finished the competition at 6 over par.

In the girls division, McLean shot a 3-over-par 74 – the same score she shot in round one – to finish at 12 over par for the tournament. The 18-year-old from Port Williams, N.S., played a strong round throughout the day with the only troublesome spot coming on the par-5 13th hole where she registered a double bogey.

“It feels awesome to win,” said McLean. “I’ve never won this tournament before and it feels really good to say that I’m the Atlantic champion. It gives me a lot of confidence going into the next couple of weeks with Nationals and Canada Games coming up so I’m just hoping to carry the momentum over and continue to play well.”

Finishing in second place, five strokes behind McLean, was 18-year-old Laura Jones from Moncton, N.B. She earned solo-second place honours after recovering from a double bogey on hole 16 with a birdie on the following hole.

One stroke back from Jones was Toronto’s Catherine Zhang who carded a 74, her lowest round of the competition. The 15-year-old got off to good starts on the front and back nine with birdies to start them both off, but they were her only two holes under par during the final day.