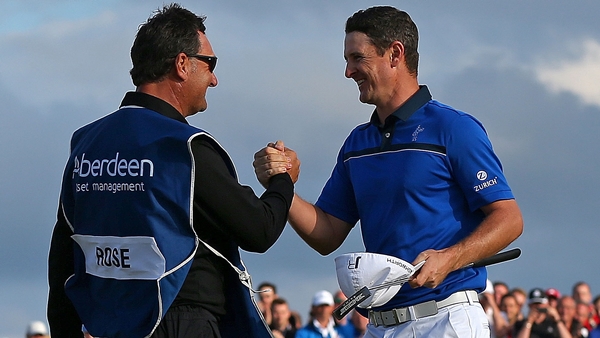 Rose turned the final round of the Scottish Open into a procession on Sunday, calmly shooting a 6-under 65 to win by two strokes and seal back-to-back successes either side of the Atlantic.

A fortnight ago, the Englishman won the Quicken Loans National at Congressional in a playoff to finally shrug off that hangover from Merion.

“It’s uncharted territory for me – I’ve never won two in a row before,” said Rose, who has banked almost $2 million in prize money from his two victories.

The big question now is: can he make it three in a row? Definitely, judging by his impressive body of work over the Royal Aberdeen links since Thursday.

Four straight rounds in the 60s. Imperious iron play in varying wind conditions. Brilliant putting, which has long been his weak point. The confidence of being a major champion stood out Sunday – Rose was nerveless from the moment he rolled in a 12-foot putt on the second hole, the first of six birdies.

His closest challengers had no chance, with playing partner Marc Warren – who started out in the last group with Rose tied at 10-under – watching on in awe.

“Not a lot I could have done about that,” said Warren, who shot a 70 for third place. “Once he gets out in front, he’s very tough to catch. The whole day he was very clinical.

“I don’t like being on the end of it but it was a pleasure to watch.”

Unheralded Swede Kristoffer Broberg finished second on 14 under after a 66, one of a slew of low scores on a windless final day that left Royal Aberdeen defenseless and there for the taking. If players wanted one last tough test before Hoylake, it wasn’t going to come here with because of a lack of wind off the North Sea, soft greens after morning rain and some easy pin positions.

Broberg earned one of the three qualifying places for the British Open at Hoylake, along with other top-10 finishers Tyrrell Hatton and Scott Jamieson.

Scotland’s Stephen Gallacher and Chile’s Felipe Aguilar broke the course record with 8-under 63s and deposed champion Phil Mickelson saved his best round for last with a 65.

Mickelson was tied for 11th while Rory McIlroy tied for 14th after a 67. Both world stars seemed satisfied with the state of their games ahead of the British Open, however.

“I feel a lot sharper and I feel like I have direction in my ball-striking and direction in my short game and putting,” said Mickelson, who will be defending the claret jug.

Likely up to No. 3 in the world from No. 6 with this 15th professional victory worldwide and first in Europe since 2007, Rose is in prime form heading to his home major. And there was no stopping him here.

The Englishman rolled in birdies at Nos. 2 and 3 – the latter from 25 feet – to power into a two-shot lead over Warren, who was looking to avenge a final-round meltdown at the Scottish Open two years ago when he blew a three-shot lead with four to play.

Rose added three more birdies in the front nine and another at No. 12, before parring his way home. He had the luxury of being able to soak up the applause as he ambled down the 18th hole, having planted his drive straight down the fairway and his approach onto the center of the green.

His iron play has been commanding this week, reviving memories of the form he produced at Merion.

“I was pretty calm out there as I got off to a good start,” Rose said. “I never felt in a lot of trouble.

Rose is making a habit of winning on tough courses, with Royal Aberdeen joining a list that includes Merion, Doral, Valderrama and most recently Congressional.

“It feels unbelievable to be back in the winner’s circle so quickly,” he said.