Rose surges to 3-shot lead at Memorial; Woods with an 85 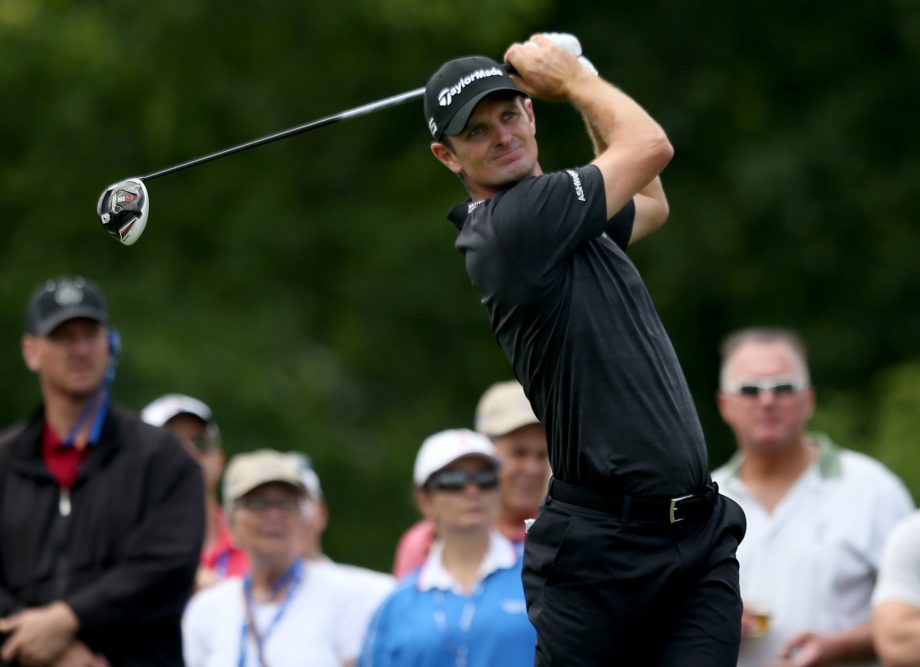 DUBLIN, Ohio – The two birdies Justin Rose made at the end of the second round at the Memorial were important. Even with the whole weekend ahead of him, he realized he wouldn’t have to race too hard to keep pace with the leaders.

He did better than that Saturday at Muirfield Village.

Rose made an early surge and kept pace the rest of the way. He putted for birdie on all but hole on the back nine, avoided the big numbers that can stop even the best rounds and wound up with a 6-under 66 and a three-shot lead over Francesco Molinari and David Lingmerth going into the final round.

“Finishing birdie-birdie gave me a boost to stay close to the leaders,” Rose said. “It put me in a position today where I felt like I didn’t have to chase too hard. I guess I played a good, solid, patient round of golf. It ended up turning into a great round of golf.”

Tiger Woods turned in the worst score of his career.

After opening with three straight pars, Woods missed a couple of short par putts, finished the front nine with consecutive double bogeys and ended his day of infamy with a quadruple-bogey 8 and signed for an 85.

He now has as many rounds in the 60s as the 80s this year – two apiece. Woods shot an 82 in the Phoenix Open in late January, took two months off to get his game in order, and doesn’t appear to be much better off now.

He chose not to speak to the media after his round. For the first time in his career, he will be first to tee off Sunday morning as a single.

“I’m not only surprised, I feel very bad for him,” tournament host Jack Nicklaus said.

Rose was at 15-under 201 as he tries to win for the second time this year, and become the seventh player to win multiple times at the tournament Nicklaus built.

“Kind of surprised to play my way into a three-shot lead,” Rose said. “I was looking just to keep pace, but it’s a fantastic position going into Sunday.”

Molinari had four birdies on the front nine until he cooled and shot 69. Lingmerth opened with a birdie to expand his one-shot lead at the start of the round, followed two bogeys with an eagle and then stalled. He shot 72.

“I played good the first two days, so I was just trying to stick to what I did those two days and just focus on my small little world,” Lingmerth said. “And I kind of lost that focus a little bit in the middle of the round today. But like I said, I was able to find it again in the last few holes and I’m happy about that.”

Jim Furyk, another past champion at Muirfield Village, had a 70 and was four shots behind.

Dustin Johnson and Keegan Bradley were among the early starters who showed what the course might yield. Johnson, who has been frustrated with his swing in recent weeks, happened to walk by the TV when he saw a commercial of himself. He was swinging it great, noticed a difference in the setup, worked it out on the range with Claude Harmon III and then shot 29 on the front.

In vintage Johnson fashion, he started the back nine with a double bogey and an eagle, then settled into a 65. Bradley was playing behind him. Bradley and Johnson are friends who often play money games at The Bear’s Club – the course Nicklaus build in Florida – and Bradley was inspired to keep up. He also shot 65.

So did Kevin Streelman, who was in a group at 10-under 206 that included defending champion Hideki Matsuyama (71). Bradley was six shots behind, while Johnson was lagging at seven shots out.

Masters champion Jordan Spieth finished with a double bogey for a 72 and was nine shots behind.

It was a day of great fluctuation – 20 shots between the best score and the worst.

Woods had something to do with that.

“Every single shot out there, you’re on your toes, you’re on your guard,” Rose said. “One poor judgment of the wind, or one poor execution of an iron shot, and you can make bogey in a heartbeat.”

Rose made his on the ninth hole and it settled him down. He never thinks he’s going to post a low score, though he had reason with four birdies through seven holes. His bogey on the ninth was the reminder he needed. He was solid the rest of the way, even missing a few birdies putts inside 10 feet, and the lead kept growing.

Rose was reminded of what his caddie, Mark Fulcher, said to him on Friday. They were still five shots in the second round when his caddie told him that he liked his position. It was a message to keep taking chances when they were there, and to play it safe when that’s what the shot required.

Rose must love his position now. Already a winner in New Orleans last month, and with the U.S. Open around the corner, he was poised to take a solid game and a bundle of confidence into the second major of the year.

DIVOTS: Patrick Rodgers was three shots out of the lead going into Saturday and shot 78. He was in a tie for 46th, and can’t afford to slip much farther to secure special temporary membership for the rest of the year, which would give him unlimited exemptions. … Phil Mickelson made six bogeys and a double bogey in his round of 78 to fall out of contention. … Andy Sullivan was tied for fifth. Anything in the top 10 should be enough to assure he’ll be safely in the top 60 in the world next week to get into the U.S. Open.

Canadian Graham DeLaet sits T24 with a round of 72 on Saturday while Adam Hadwin carded a round of 71 to finish T35 after round three.