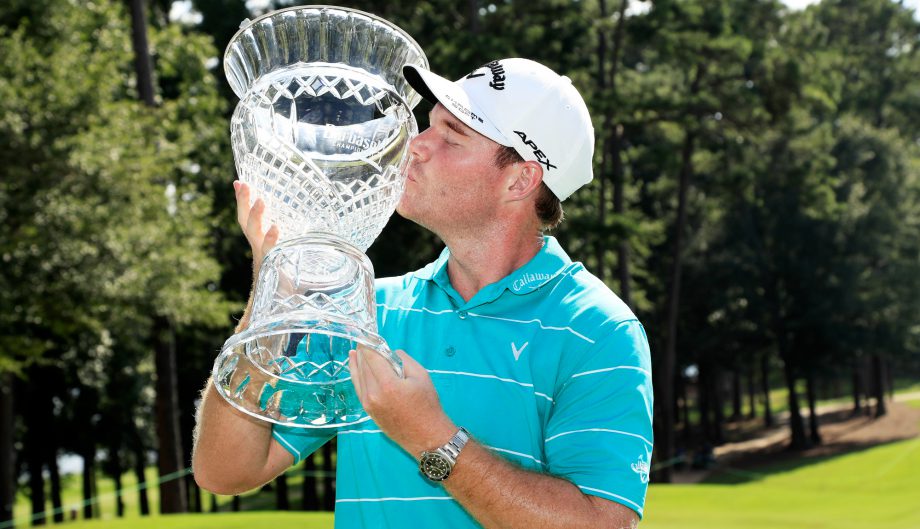 Grayson Murray unhappily found himself with a couple of extra days to prepare for the Barbasol Championship _ and ended up with a breakthrough victory.

After missing the weekend cut last week in the John Deere Classic, the rookie won his first PGA Tour title Sunday. He holed a 5-foot par putt on the final hole for a one-stroke victory.

Murray closed with a 3-under 68 to edge Chad Collins on Grand National’s Lake Course. The 23-year-old former Wake Forest and Arizona State player set up the winning par with a long putt from below the hole. He finished at 21-under 263, a tournament record.

“I was in control,” said Murray, who earned $630,000. “I didn’t get out of my game plan once. I was going to let them make the mistakes instead of myself. I was going to make them have to birdie the last hole, or the last two holes. I was playing for par on 17 and 18. Those are two hard holes and I knew if I parred both of those they would have to do something special to beat me.”

Murray arrived in Alabama a week earlier after suddenly finding himself with an open weekend. It paid off, the win securing him a spot in the PGA Championship in his home state of North Carolina, though not the Masters.

Murray came in ranked 124th in the FedEx Cup standings, with the top 125 qualifying for the playoffs. He jumped to 58th.

“My goal is to get in the playoffs this year,” he said. “That was my goal. I didn’t set my goals too high for my first year.”

A big key to his victory: “That was the best I’ve ever driven it in my life.”

Collins closed with a 68 two days after posting one of the tournament’s two rounds of 60. A tap-in for par on No. 18 left him waiting to see if Murray would stumble.

Collins had a run of four birdies in five holes leading into the 18th. He missed a 6-footer with a shot at another one and a potential tie with Murray.

“I gave myself an opportunity,” he said. “It was a nervy bad putt. It wasn’t obviously what I wanted, but to put yourself in that position, that’s ultimately what you’re trying to do. And the more times I’m able to do that and put myself in that situation, maybe one day it will be my day. Just today it wasn’t.”

Collins tied for fourth at The Honda Classic and his best previous finish was third last year in the Texas Open.

“It’s my best finish ever out here on tour, had the best round I’ve ever had on tour,” he said. “You gain tons of confidence from this going forward. You can only draw positives from it. ”

Coming off a third-round 60, Stallings took the solo lead with a birdie on No. 10 that put him under par for the first time of the day. He fell back with a double bogey on the par-5 16th, three-putting after taking a drop following an errant drop.

Amateur Sam Burns of LSU tied for sixth at 18 under after a 66, matching Ryan Blaum (64) and Cameron Tringale (68). David Hearn of Brantford, Ont., shot his second consecutive 70 to finish 12 under and tied for 27th.

Ryder Cup captain Jim Furyk, who didn’t qualify for the British Open, finished at 11 under after a third straight 68.

The final round started early on two tees because of a bad weather forecast, but the conditions held steady in sweltering heat.