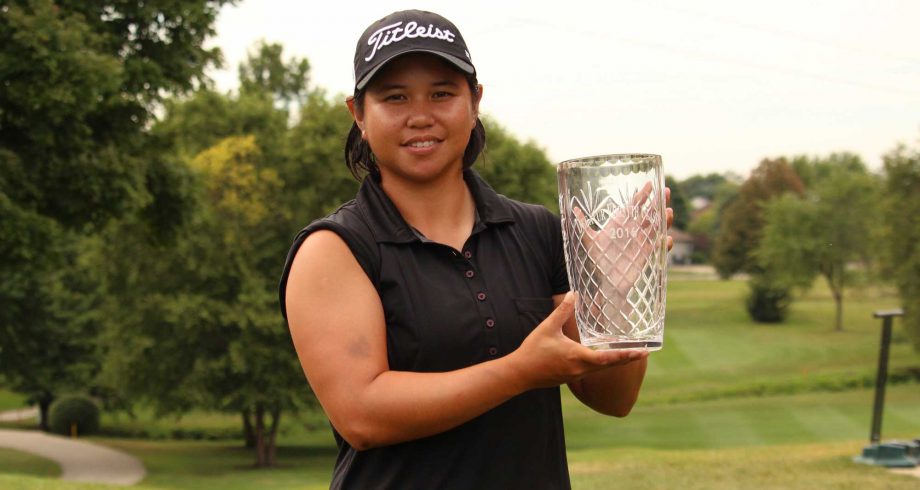 FORSYTH, Ill. – Clariss Guce (Artesia, Calif.) made birdie on hole 14 and closed with four pars to win the Decatur-Forsyth Classic by two shots at 10-under, 206. The rookie carded a 1-under, 71 on Sunday at Hickory Point Golf Course to earn her second win of the 2016 season. Laura Gonzalez Escallon (La Hulpe, Belgium) posted a 5-under, 67 to finish in a tie for second with two-time winner Jackie Stoelting (Vero Beach, Florida) at 8-under, 208.

Guce, who was number 84 on the Volvik Race for the Card money list in mid-July, moves into the top 10 for the first time this season. She is now number seven with exactly seven events remaining. The 26-year-old earns the first-place check of $19,500 to increase her total to $56,656.

“Anytime you win, it feels great,” said Guce, who moved to the United States with her family from the Philippines in 2001. “Every win is special and I’m just overjoyed.”

Guce was doused with water again by her crew of rookie friends – Kristin Coleman, Jenny Coleman, Mallory Kent and Dana Finkelstein – as soon as she came off the green.

“I knew I was going to get soaked,” said Guce, who spotted her friends on hole 15. “I saw them walking around with a lot of bottles of water and I was thinking don’t screw it up and just two putt.”

Guce, who entered the day with a two shot lead, made eight pars and a birdie on the front nine to build a three shot lead at the turn. Her lone bogey of the day came on the 12th hole and all of a sudden her lead was down to one after Gonzalez Escallon drained a 20-footer on the 18th to finish at 8-under. Guce hit a great approach shot into the par-5 14th and made a 7-footer to build the lead back to two. She made par the rest of the way to comfortably win.

“My irons and my putting were the two keys,” said Guce. “I just stayed patient and I think I was a little more nervous today than Rochester because I had the lead. My friend Hayley (Davis) was on the bag and she kept me calm and we just laughed the whole day.”

Guce missed five cuts in a row in the middle of the season and had to take a few tournaments off to flush the negative thoughts and hone in on her swing.

“I didn’t really think about what others were saying, I’m just trying to go to each tournament and play as best I can,” said Guce. “If it works out, it works out. If it doesn’t, at least I know I gave my best.”

Guce doesn’t want to look too far ahead now that she is in the top ten with only seven events remaining.

“There is still a lot more golf and anything can still happen,” said Guce. “Just like in Rochester, I went from 84th to 12th so you just never know.”

Guce wins her second on the weekend of her parents 28th wedding anniversary. She also owes her dad, a professional jockey that has won over 1,000 races, a dinner or two now.

“Maybe I’ll by him dinner, it depends how many races he wins this week,” joked Guce. “I’ll definitely try to get them something nice because they are my inspiration.”

Guce remembers the struggles the family went through when they first relocated to the U.S. and her dad had a hard time finding races.

The Tour heads to Milwaukee and Brown Deer Park Golf Course for the 2nd annual PHC Classic next week. The field of 144 will compete for a total purse of $100,000.

Laura Gonzalez Escallon (La Hulpe, Belgium) peaked at the leaderboard on 18 and saw she was in a 3-way tie at the time for second. She had a 20-footer for birdie and nailed it.

“I was like ‘I don’t want to be in a tie’ and it was big to make that,” said Gonzalez Escallon with a wide smile. “It’s always nice to play on Sundays and try to shoot as low as I can. I was also having a blast with my caddy.”

Brittany Marchand of Orangeville, Ont., carded five birdies through a bogey-free day for a final-round 67. The former Team Canada National Squad member registered a 6-under 210 tournament total to claim her share of eighth.