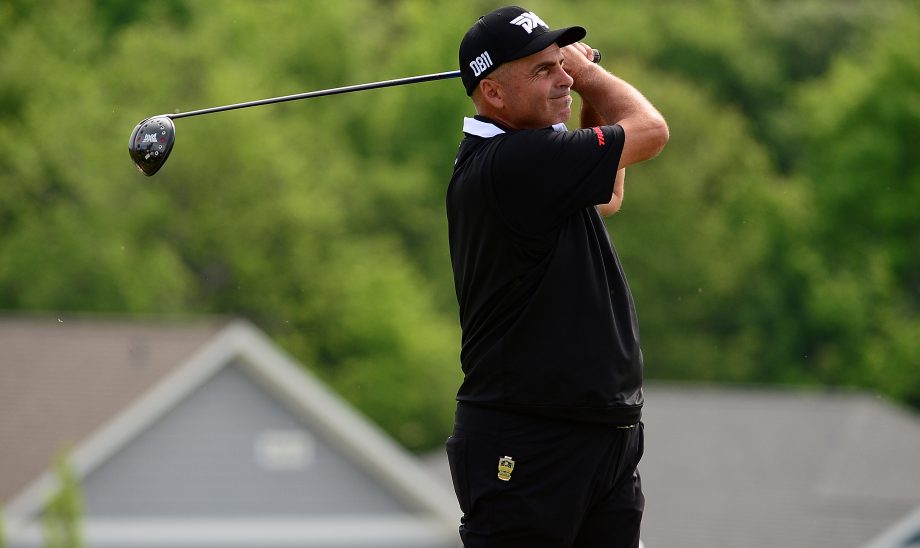 BENTON HARBOR, Mich. – Rocco Mediate played the first 13 holes in 9 under and closed with five pars for a 62 to match the Senior PGA Championship and Harbor Shore records Thursday.

Taking advantage of greens softened by overnight rain, Mediate matched the marks set by Kenny Perry in the 2012 final round.

“It wasn’t wet, as far as soaking wet. A couple wet spots. But it was fine,” Mediate said. “Greens were good. Soft. They received pretty good. … I know it rained like heck last night. I heard it last night. But the golf course was fine. Greens were good. Everything was good. A little softer.”

The 53-year-old Mediate capped a front-nine 29 with an eagle on the par-5 ninth and added birdies on the par-3 11th and 13th holes at Jack Nicklaus-designed Harbor Shores.

“Solid stuff,” Mediate said. “A lot of fairways. A bunch of greens. When I missed it was in the right spot. … I hit it close, so I had a lot of short putts for birdie. I didn’t really make a long one. It was one of those days. I just drove it really well. I hit a lot of solid irons.”

Mediate has two victories on the 50-and-over tour after winning six times on the PGA Tour.

“Stuff I’m working on is coming around,” Mediate said. “I’m just trying to get back to what I used to do and that’s hit the ball in the middle of the face most of the time. It’s been a few years since that’s happened. So it was a lot of fun. A lot of fun.”

Gene Sauers had a bogey-free 63.

“I like being up are early in the morning. It was nice,” Sauers said. “You get fresh greens and I hit the ball really solid. Just tried to concentrate on just where I wanted to place the ball and just not have too many long putts, because you can get some really pressure putts out here.”

Mike Goodes shot 64, and Kenny Perry, Kirk Triplett and club pro John DalCorobbo were another stroke back. Perry played alongside Mediate and two-time defending champion Colin Montgomerie, who had two late bogeys in a 67.

“We were all feeding off each another,” Perry said. “Rocco shot 29 on the front nine and drug us all along in there. He hit it close and made a lot of putts. It kind of set the tone for the whole group.

“The whole group played nice until the last couple holes, I don’t know if we got tired or what, but they’re hard holes, 16, 17 and 18 are tough holes. I bogeyed 17 and I think Colin bogeyed 16 and 17. But Rocco parred them all. So he had an amazing round.”

Bernhard Langer, fresh off the 100th victory of his career – at a major, no less, at the Regions Tradition in Alabama, opened with a 69.

The 58-year-old German is going for an unprecedented sweep of all five PGA Tour Champions majors. In Alabama, he won his sixth major championship as a senior and joined Nicklaus as the only players to win four different senior majors. Nicklaus had largely retired when the Senior British Open was added to the major rotation. He only played that once in its first year as a major in 2003.

John Daly struggled to a 75 in his first senior major start. He had a 9 on the par-4 16th, a double bogey, three bogeys and six bogeys. Daly tied for 15th and 17th in his first two senior starts since turning 50.

Montgomerie played the first 10 holes in 6 under, with four straight birdies on Nos. 7-10. The Scot won in 2014 at Harbor Shores and last year at French Lick Resort in Indiana.

DalCorobbo holed out with a 9-iron from the fairway for an eagle on the par-5 18th. A PGA assistant professional at Brickyard Crossing in Indiana, he won the Senior PGA Professional Championship in October.

“For not playing in a competitive event for quite some time, I think that the focus, really, the plan was, to not so much to score, but can I handle my mental routine and stay within that. So for the most part I think I did a good job. I hit a tremendous shot on 18 and a lot of that is luck, but I hit some good shots during the day and really happy about that.”

St. Catharines, Ont., resident, Rod Spittle shot 2-under to sit T30, while Stephen Ames of Calgary is T68 after carding a 71.