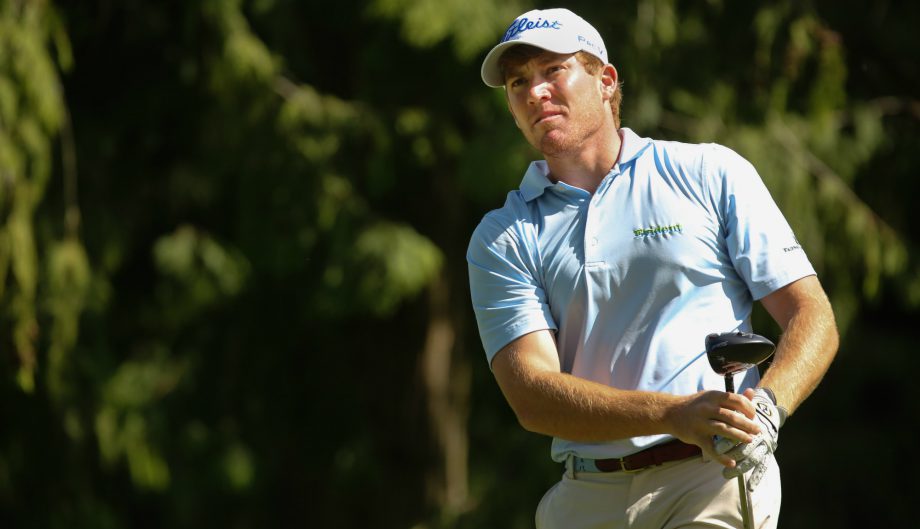 Wilmer, Alabama’s Robby Shelton shot an 8-under 63 on Thursday at Gallagher’s Canyon Golf and Country Club to take the first-round lead at the GolfBC Championship, the third event of the 2017 Mackenzie Tour – PGA TOUR Canada season.

The former University of Alabama standout notched nine birdies and a bogey to lead by one over Dearborn, Michigan’s Evan Bowser after day one at Gallagher’s Canyon.

Shelton was one of the top amateur players in the United States while playing at the University of Alabama from 2013-2016 and is making his third start of his first season on the Mackenzie Tour. The 21-year old said he’s enjoyed getting his feet wet as a pro in Canada so far this season.

“This Tour’s deep. There’s a lot of good players,” said Shelton. “You have to play well. A lot of these guys out here could make it on the PGA TOUR right now. It’s a process and a stepping stone, and a lot of guys have to get through it.”

With three rounds to go, Shelton said he knows he’ll need more low rounds to keep the rest of the field at bay.

“When you get off to a start like this, for sure your expectations are high, but you still have to play really well, or these guys are going to catch you,” said Shelton.

Bowser is making his third career start on the Mackenzie Tour. He earned exempt status for the first four events of the season at the USA West #2 Q-School in March.

“When I turned pro in January, I thought about how golf’s always been fun for me. I never looked at it like a job or thought about the money, and I still don’t do that. I just try to hit the next shot the best I can, and that’s all I can do,” said Bowser

Gilchrest opened with a 6-under-par 65.

“The key was the front nine. I made two 30-footers for eagle that got me going pretty good. I had some bad breaks and was in some tough spots on the back nine and made some good pars to get it in at 6-under,” said Gilchrest.

As an amateur, Shelton was consistently among the top players in college golf. He played at the University of Alabama from 2013 to 2016, where he won seven times, helped the Crimson Tide to the 2014 National Championship and was named a 1st team All-American in each of his three seasons.

Shelton finished third at the 2015 Barbasol Championship on the PGA TOUR, the highest finish by an amateur on the PGA TOUR since Phil Mickelson won the 1991 Northern Telecom Open.

Shelton earned exempt status for the 2017 season by winning the USA East #1 Q-School. He opened his 2017 season with finishes of T20-T14 and ranks 21st on the Order of Merit.

Watch the first round highlights below.

Get caught up on day one at the @gbcchampionship with Thursday's highlights ? pic.twitter.com/Alwqnly9WC