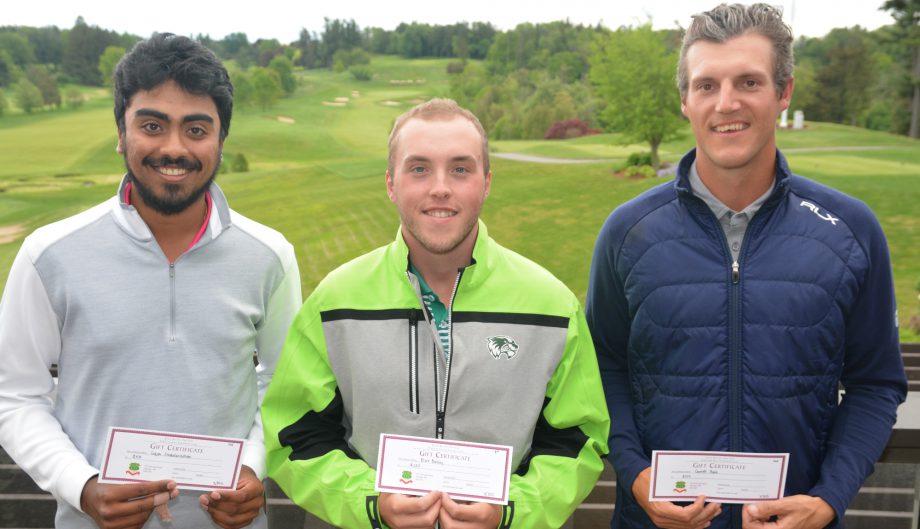 While it was 3 degrees Celsius and spitting rain at home on the rock in Gander, Newfoundland on Monday, the 20-year-old Junior at Utah Valley University played near perfect golf over the famed Harry Colt layout in Ancaster, for a one-stroke victory over travelling partner, Garrett Rank of Elmira and Gajan Sivabalasingham of Stouffville.

“Every one of the 27 holes out there are awesome,” says Bursey, who carded a double-bogey on his second hole of the day, but quickly rebound for birdies on three of the next four holes on Hamilton’s East Course to get himself back in red numbers.

Bursey finished the 27-hole marathon at even par carding nines of 35-36-34 for a total of 105 strokes. He tallied one double-bogey, three bogeys, five birdies and 17 pars as a field of 84 top amateur and senior amateur players teed it up at one of Canada’s finest invitationals. Fourth place went to Simon McInnis of Toronto at 107 followed by Eric Ross of Burlington in fifth.

“I never thought much of winning today. I was just trying to put together some solid shots and I was fortunate to keep the ball in play most of the day,” says Bursey, who took the lead into the final round of the 2016 Canadian Men’s Amateur Championship last summer, but settled for fifth place in what he calls “a very good learning experience.”

“This is a phenomenal golf course, I can’t say enough about the layout, the views, it’s amazingly manicured. The whole place is first class,” added Bursey, who flew to Toronto last week to practice and travel with Rank.

They played Craigowan GC in Woodstock and The National Golf Club of Canada, as well as a practice round at Hamilton G&CC the day before the invitational. Their next stop is the Monroe Invitational Championship in Pittsford, NY, followed by The Glencoe Invitational in Calgary, AB and the Northeast Amateur Invitational in Rumford, Rhode Island.

“This is a wonderful place with its history and the golf course is fantastic,” says Rank, who was also playing it for the first time. “The shot values are outstanding and the changes in elevation keep you guessing. You really need to work the ball around to get into a good place to score and they have Big Boy par-3s.”

In the Senior Division, Lars Melander of Hidden Lake GC in Burlington outlasted Robert Gibson of Cedar Brae GC in Toronto in a four-hole playoff. Both players finished regulation play at 6 over par for a score of 111.

“Winning is not always easy. This is the first significant senior event I have won,” says Melander, who lost in a playoff just last month at the Burlington G&CC Invitational. “This is one of the top amateur events in Ontario, so to win here is very satisfying. It spurs me on to work harder at my game, so I can keep up with the younger guys,” added the 65-year-old.