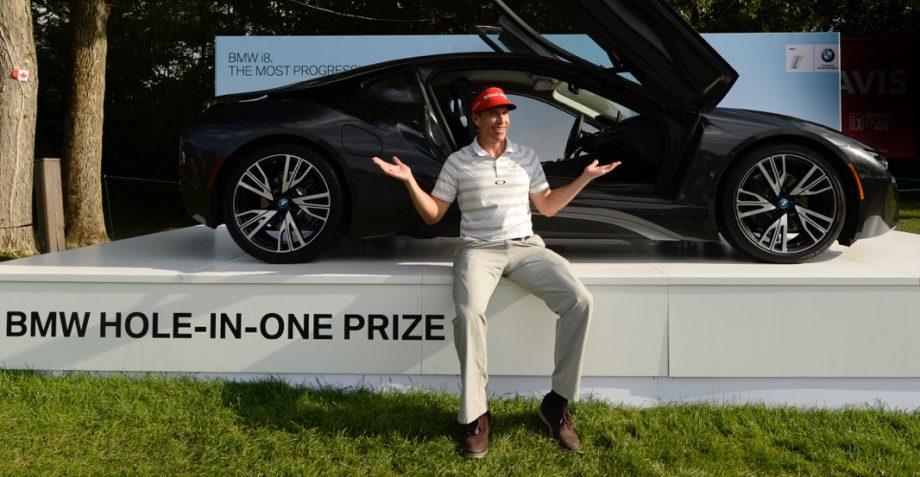 RICHMOND HILL, Ont. –  BMW Canada handed over the keys to a new BMW i8 at the 2015 RBC Canadian Open in Oakville, Ont.  Ricky Barnes earned the new vehicle after hitting a hole-in-one during tournament play at Glen Abbey Golf Club.

“What a day out there,” said Barnes. “I haven’t had a hole-in-one in a long time and to win the i8 is unreal. The place was full of energy.”

Barnes’ ace on the 165 yard 4th hole during championship play was his first hole-in-one on the PGA TOUR.

“What a thrill,” said Kevin Marcotte, Drector of Marketing at BMW Group Canada. “For Ricky and the golf fans who witnessed the perfect shot. I know Ricky will have many more joyous moments behind the wheel of the i8.”

Revered as the world’s most-progressive sports car, the BMW i8 is an icon of innovation. It combines the efficiency of an all-electric motor and the power of a TwinPower Turbo engine to deliver a truly exhilarating driving experience.

Barnes, 34, now residing in Phoenix, AZ is a California native and former All-American at the University of Arizona. Barnes turned pro in 2003 and has enjoyed great success on the PGA Tour, including a standout performance at the 2009 US Open at Bethpage Black where he finished tied for second.

“It’s a partnership we’re very proud of,” said Marcotte. “To showcase our brand alongside the best players in the world is very fitting.”