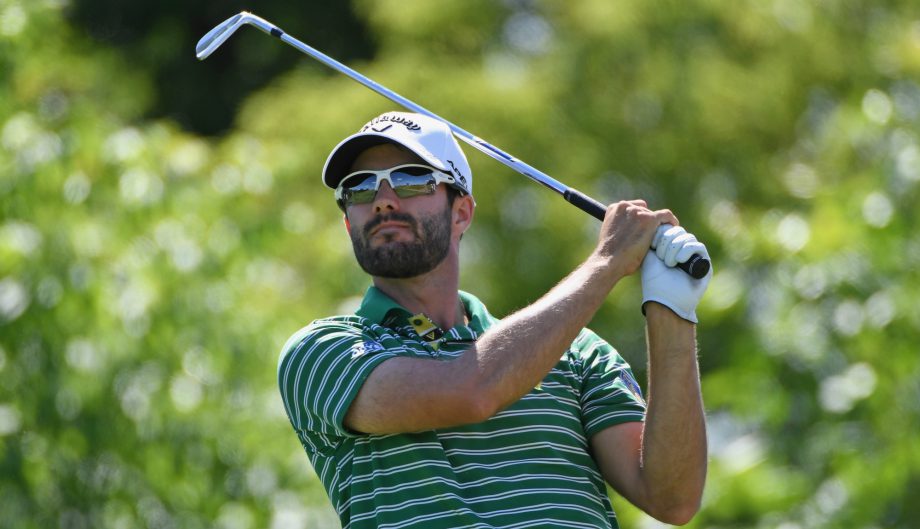 Erin Hills made its debut as a U.S. Open course Thursday with a most gracious welcome for Rickie Fowler, who matched the record to par in the opening round with a 7-under 65 on the longest course in major championship history.

Fowler had a one-shot lead over Paul Casey and Xander Schauffele. And they plenty of company.

The low scoring suggested the 11-year-old course was a cream puff, hardly the USGA’s idea of the ultimate test in golf.

Just don’t mention that to some of the best players in the world.

Jason Day had two triple bogeys and posted a 79, his worst score ever in the U.S. Open. Rory McIlroy joked earlier in the week that anyone who couldn’t hit such wide fairways “might as well pack your bags and go home.” He spent all day in the knee-high fescue and shot 78, his worst U.S. Open score.

Defending champion Dustin Johnson probably didn’t feel so badly by the end of a most peculiar day. He only shot 75, with just one birdie.

“You won’t get a better day for scoring,” Johnson said wistfully during the long walk to sign his card.

Fowler, who shared the 36-hole lead at the Masters in April, never came seriously close to bogey because he was never in trouble. He kept it in the short grass, the secret to Erin Hills that wouldn’t appear to be that difficult with some of the widest fairways for this major.

“You don’t get many rounds at the U.S. Open that are stress-free,” Fowler said.

Fowler’s seven birdies were from no more than 12 feet, including three in a row around the turn. His 7-under par tied the record to par for the first round of a U.S. Open held by Jack Nicklaus and Tom Weiskopf, who each shot 7-under 63 at Baltusrol in 1980.

“It is always cool to be part of some sort of history in golf,” Fowler said. “But I’d rather be remembered for something that’s done on Sunday.”

Rickie Fowler credits a shorter driver for his accuracy off the tee in Round 1.pic.twitter.com/TuxloZeiYP

Day and McIlroy, just to name a few, might not make it that far.

Of the top 10 players in the world, only Masters champion Sergio Garcia (70) and Fowler broke par. For players like Jordan Spieth (73) and Johnson, it was a matter of not making enough putts. For most others, it was being careless off the tee and facing the rigorous test of recovering.

Casey started eagle-birdie and finished with two birdies over the final four holes for his 66.

“I was just trying to have half as good a round as Rickie had,” said Casey, who played in the afternoon. “The scoring was so good this morning. I was happy it stayed benign for us, and I capitalized on it.

The opening round was without Phil Mickelson for the first time since 1993. He was in California for his daughter’s high school graduation, hopeful for enough of a weather delay to jet across the country to Wisconsin. But as the sun rose over Erin Hills, and the forecast was for no rain, Mickelson withdrew.

More startling than the low scores was smoke rising from about a half-mile away when a commercial blimp, not affiliated with the tournament, crashed into a field and burst into flames. The pilot, the only one aboard the blimp operated by Florida-based AirSign, was being treated for injuries.

“I was teeing off and I looked up and saw it on fire, and I felt sick to my stomach,” Jamie Lovemark said.

On the golf course, there was only a barrage of birdies.

Brooks Koepka, Tommy Fleetwood and Brian Harman were at 67, with Patrick Reed and Adam Hadwin in the group at 68. Hadwin tied a U.S. Open record when he made six straight birdies, from the 18th hole through the fifth hole. He was 100 feet away for birdie on No. 6 and burned the edge of the cup on that one, except that it ran by some 7 feet and he three-putted for bogey.

“You don’t often see that in a U.S. Open,” Hadwin said. “But there’s way too many holes out here where one bad shot could be a double bogey quickly. So I did a really good job of staying present, staying focused on the next shot.”

He has tied the U.S. Open record for most consecutive birdies. pic.twitter.com/L81MGWlJDH

The course was set up at 7,845 yards, the longest of any major. Length wasn’t the issue. It was sporadic storms earlier in the week that has softened the greens. One example of that was Fowler hitting 3-wood into the green on the 632-yard 18th hole, with a breeze at his back. His ball landed on the green and only rolled out about 10 feet. On typical U.S. Open greens, that would have run all the way off the back of the green.

Still to be determined is what kind of test Erin Hills can present the rest of the week, especially with more rain on the way Friday and Saturday afternoon.