Remember to thank a volunteer 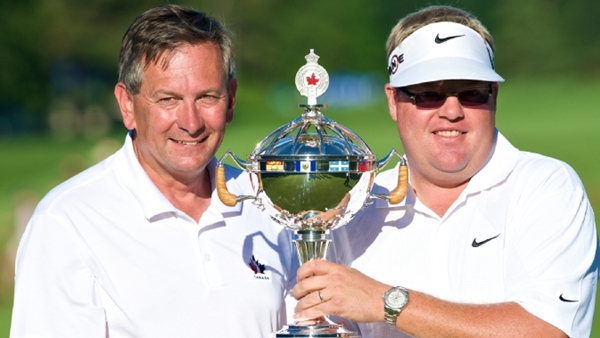 When Jim Clark began volunteering for Golf Canada over 25 years ago he never expected it would lead him to being the tournament chair of the RBC Canadian Open seven times.

While he may not be the longest standing volunteer for Golf Canada, Clark’s dedication and passion for volunteering is truly evident.

“I was about 25 years old the first year I volunteered and I thought this is cool – I just kept going back and haven’t missed since,” Clark said. “It’s such a wonderful touchpoint and conversation starter. It makes me light up when I talk about it and it gives me energy.”

Clark’s volunteer history started out in the 1980’s at Glen Abbey Golf Club when he signed up as a volunteer and picked up his blue shirt.

“I found that I got hooked and it was so much different than my real job,” said Clark who’s made his career in computer software sales. “The tournament came to life for one week with 1,500 volunteers and 24 committees; it was like a division of a corporation that has life for a week.”

After his inaugural experience he’s never looked back, serving on numerous committees and chairing Canada’s National Open Championship seven times – something he never expected he’d do.

Clark has fond memories of being in the mix at the championship with Golf Canada’s CEO Scott Simmons, whom he’s known since they were both in their 20s.

“Volunteering has given me opportunity to meet people who work in the golf industry that make their living in it, fascinating people that I’ve known for 25 years,” Clark said.

Every volunteer’s story is different but what makes the experience unique at Canada’s National Open Championships is that together volunteers have one goal in mind.

“We come together and work together to deliver the best event we can,” he said. “Whether it’s walking scoring, corporate hospitality or course maintenance and sanitation, everyone works together with a common goal and it’s a really happy place to be.”

Having come full circle from his first blue volunteer shirt, Clark was most recently the co-tournament chairman for the 2013 RBC Canadian Open at Glen Abbey Golf Club. In addition, he is currently serving as the chairman for golf’s organizing committee at the 2015 Pan/Parapan American Games and can’t stress the importance of saying thank you to volunteers enough.

The RBC Canadian Open and Canadian Pacific Women’s Open are seeking volunteers to assist with running their championships.