Reed’s caddie out of Presidents Cup after conflict with fan 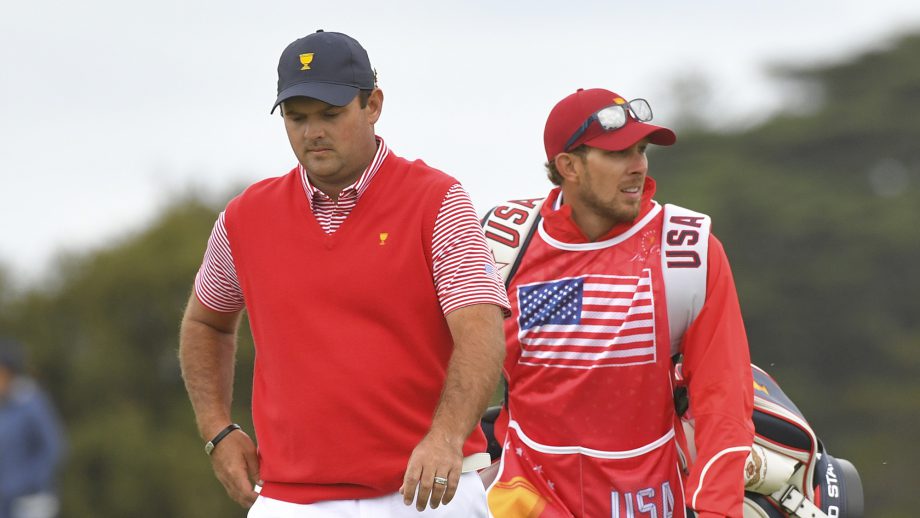 Patrick Reed and Caddie Kessler Karain during the first round four-ball matches of the Presidents Cup at The Royal Melbourne Golf Club on December 12, 2019, in Melbourne, Australia. (Photo by Ben Jared/PGA TOUR via Getty Images)

MELBOURNE, Australia – The caddie for Patrick Reed will not be on the bag for the final session of the Presidents Cup after shoving a spectator who he felt was encroaching too close to Reed while cursing him.

The tour announced the decision after Saturday’s dual session, which ended with the International team holding a 10-8 lead. Reed said in a statement he respected the decision and that everyone was focused on winning.

Kessler Karain, the brother-in-law of Reed, says he heard heckling for three days at Royal Melbourne, some had taken it too far and he’d had enough.

Reed was a singular target of the American team this year because of a rules violation last week in the Bahamas. He twice removed a clump of sand from behind his ball in a waste area at the Hero World Challenge. When he was shown the incident on video, Reed accepted the two-shot penalty.

Reed failed to make a birdie in fourballs Saturday morning as he and Webb Simpson lost for the third straight time.

“Riding on the cart, guy was about 3 feet from Patrick and said, `You (expletive) suck.’ I got off the cart and shoved him, said a couple things, probably a few expletives,” Karrain said in a statement to “Fore Play,” a podcast operated by Barstool Sports.

Karrain said security arrived and he left in the cart.

“I don’t think there’s one caddie I know that could blame me,” Karrain said. “Unless his bones break like Mr. Glass, the most harm done was a little spilled beer, which I’m more than happy to reimburse him for.”

Among the possibilities to replace him as Reed’s caddie is Kevin Kirk, his swing coach.

U.S. captain Tiger Woods said the situation involving Reed, one of his four picks, was not a distraction.

“We came here as a team. We rallied around our teammate and we’re excited about tomorrow,” Woods said.

He placed Reed in the No. 3 spot in the lineup, after Els had gone first and put C.T. Pan in that spot. That avoided the chance of Reed facing one of the three Australians on the team.

Fans this week have called the former Masters champion such things as “Patrick Cheat” and poked fun at him, with one fan introducing him as “The Excavator” when he teed off for a practice round Tuesday.

Reed didn’t help his cause Friday when he made a birdie putt, cupped his ear and then pretended to use his putter as a shovel. He enjoys mixing it up with the gallery in these team competitions, but the rules violation in the Bahamas was blatant on the video and sensitive to players who hold the rules in high regard. Reed claimed his club was some 8 inches behind the ball. Video did not indicate that.

Els said he felt bad for the caddie and the fan, and he made a point of saying the gallery was not nearly as bad as what the International team faced two years ago in New Jersey.

“The caddie must have been very hot, obviously fed up with what he heard, probably,” Els said. “I feel for the fan. He came to watch golf, and that’s probably the last thing he thought was going to happen. So I feel for both of them.”

Reed created the wrong kind of memories at the Ryder Cup last year when he did an interview with The New York Times right after the U.S. loss, criticizing Jim Furyk for sitting him out two matches and Jordan Spieth ending their partnership.