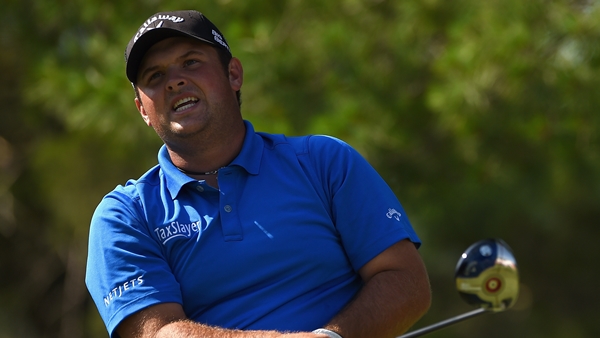 BETHESDA, Md. – Patrick Reed is not interested in talking about being top five in the world.

He only cares about PGA Tour victory No. 4.

Reed, who turned off some of his peers when he won at Doral and said he was among the top five players in the world, held it together Saturday at steamy Congressional for an even-par 71 to build a two-shot lead in the Quicken Loans National.

As if Congressional wasn’t difficult, the rest of the field now has to chase a guy who has won all three previous PGA Tour events when he had at least a share of the lead going into the final round.

On a day when making pars often meant moving forward, Reed overcame three bogeys in a seven-hole stretch by playing the last five holes at 1 under for a two-shot margin over Seung-yul Noh, Freddie Jacobson and Marc Leishman.

The final round will have a player in the last group with a red shirt, only it won’t be tournament host Tiger Woods, who missed the cut. Reed has been wearing a red shirt and black pants on Sunday to pattern himself after Woods. He also cited Woods when asked which player was his idol in being confident.

Reed took that to a new level when he won at Doral and said he felt he was among the top five in the world. He currently is No. 29.

“You can’t play this game with lack of confidence,” Reed said. “So just one of those things that, you know, we’re all trying to strive for the same thing, and some guys get there and that’s all we’re trying to do.”

Dating to his first PGA Tour win at the Wyndham Championship last August, the only top 10s Reed has had have been victories. He attributes his sporadic play to his wife having their first child last month. Now, Reed says his life is becoming settled and his game is rounding into shape.

Noh finished off his 5-under 66 – the best score of the third round – about the time the leaders went off. He was at 4-under 209, which looked better by the hour.

Jacobson made four birdies in his opening eight holes to reach 8 under, only to take double bogey on the 11th hole and a sloppy bogey on the par-5 16th hole. He wound up with a 71. Leishman was still only one shot behind until he failed to get up-and-down for par on the 17th and fell to a 73.

“At the start of the day, we probably knew that anything under par was going to be a really good score,” Leishman said. “I actually said to my caddie, `It feels a bit like a U.S. Open’ because there were a few pins that you really didn’t have a chance to get at. But I think that’s good. It’s a tough golf course. It’s long. If you’re not in the fairway, you have no chance.”

Reed was not in the fairway on two holes where he made birdie, and he managed to pull it off.

In deep rough to the right of the fourth fairway, he was 169 yards away and decided to smash a 9-iron to clear the bunker instead of trying a soft 8-iron. It worked out perfectly. The ball bounded past the hole and up a slope, and slowly rolled back to within inches of the cup.

“I thought there was about a 3 percent chance I could cover that bunker, and I ended up being perfect,” Reed said. “It was nice whenever I saw it roll up the hill and I saw it come back down because I thought, `All right, we have about 5, 7 feet for birdie.’ Didn’t know it was a couple inches, which was nice.”

Oliver Goss of Australia, the U.S. Amateur runner-up last year making his second pro start, was part of a four-way tie for the lead going into the third round. He was still in the mix until a three-putt from 10 feet for double bogey on No. 11. He had a 76, though he was still only five shots behind.

Justin Rose was within two shots of the lead after a hot start, only to make bogey on the par-5 ninth and a double bogey on the 11th hole. He battled back with a pair of late birdies, only to drop another shot on the 18th for a 71. Even so, he was only three shots behind.

This could be a perfect fit for a U.S. Open champion. None of the last 26 players who teed off broke 70. Rose took note of the rapidly changing color of the greens, and his only fear was officials watering the greens overnight, which would make it easier for the early starters.

“I’d be a fan of them letting them go a little bit and making this a tough tournament and sort of having another U.S. Open,” Rose said. “That would be my wish right now. But obviously, the course is firm. Wedges were releasing 10 yards by the end of the day. It’s definitely a test. It was fun. I enjoy that type of golf.”