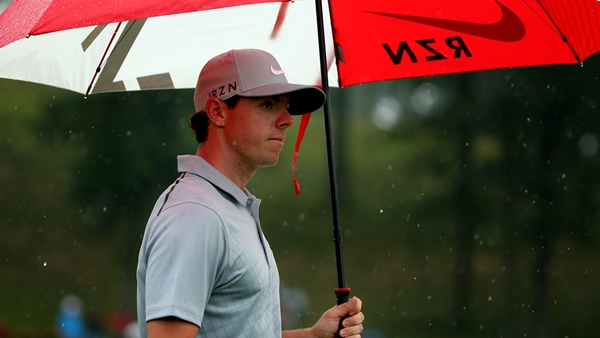 LOUISVILLE, Ky. – The second round of the PGA Championship was off to a soggy start and a sudden stop Friday.

A steady rain forced officials to suspend the round after just 20 minutes because of too much water on the putting surfaces and fairways. Work crews already were using squeegees on the greens when another burst of showers hit Valhalla.

Play was halted about 45 minutes before Rory McIlroy was to tee off, and as Ryan Palmer was playing the first hole.

Palmer, Lee Westwood and Kevin Chappell shared the first-round lead at 6-under 65. Palmer was the only one of the leaders to play Friday morning. McIlroy was among those one shot behind.

It already was shaping up as a long day.

Play resumed after 45 minutes, but with more rain in the forecast, it is unlikely the second round would be completed Friday. Tiger Woods, in 109th place and in danger of missing the cut at the PGA for the second time in four years, plays in the afternoon.

Adding to the difficulty of a soggy course, players had to contend with mud.

Championship director Kerry Haigh said the ball was to be played as it lies – the players will not be allowed to lift, clean and place their golf balls through the green as often happens in regular tour events.

He said no consideration was given to restarting the second round using preferred lies. Once a round begins under one set of conditions, it cannot change. Haigh didn’t see the need.

“We are playing the ball down,” Haigh said. “Once we start the round, we will not change. Really, there was no consideration to that. The fairways are good. And the Rules of Golf allow for relief if the ball is in casual water.”

Rain was in the forecast for most of Friday. While it would soften the greens, it would make the course longer.

Palmer came up short of the green from out of the rough on the 504-yard second hole, though he pitched to 2 feet to save par. He opened with three straight pars to stay in a share of the lead.

McIlroy typically enjoys soft conditions. That was the case at Firestone last week, and he said he was “licking his lips” when he saw the course. McIlroy rallied from a three-shot deficit to win the World Golf Championship, his first tournament since a wire-to-wire victory at Royal Liverpool in the British Open.

McIlroy won his first major at rain-softened Congressional in the 2011 U.S. Open with a record score of 16-under 268.