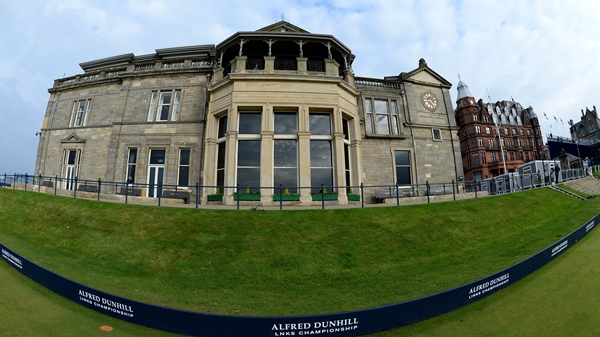 ST. ANDREWS, Scotland – The Royal & Ancient Golf Club, exclusively for men since it was founded 260 years ago at St. Andrews, will vote in September on whether women can join the club.

“It’s an exciting day for the club,” club secretary Peter Dawson said Wednesday. “There will be quite a bit of internal discussion between now and the September vote. It’s a matter for the members to determine. All indications are very supportive.”

A statement from the club said that all committees were “strongly in favor of the rule change” and asked members to go along.

The move was hailed by British sports minister Helen Grant, who was hopeful a favorable vote would encourage other single-sex golf clubs to follow suit.

Dawson, however, said the vote would have no bearing on whether the British Open is played on links courses that exclude women as members – Royal St. George’s, Royal Troon and Muirfield, where Phil Mickelson won last year. The Open returns to Troon in 2016.

“I don’t want you to think there’s any connection between this vote and these issues,” said Dawson, R&A chief executive. “What other clubs choose to do in the UK is not connected to this. … To be entirely honest, we’re not here to put pressure on other clubs that have supported The Open Championship and other R&A championships.”

The Royal & Ancient Golf Club of St. Andrews has about 2,400 members from around the world and dates to 1754. The clubhouse is among the most famous buildings in golf, overlooking the Old Course at St. Andrews.

Augusta National for years was the symbol of men-only golf clubs because it hosts The Masters every April. The club announced in August 2012 that it had invited women to join for the first time – former Secretary of State Condoleezza Rice and South Carolina financier Darla Moore.

Even though Augusta National went 80 years without a female member, it had no policy that barred women from joining. The R&A had such a policy, and that’s what will be voted on in September.

Dawson said he did not think Augusta National’s decision had any bearing on the Royal & Ancient Golf Club.

“We noted what happened at Augusta,” he said. “They have their own procedure of doing things. We are doing this because of our governance role.”

He also said the R&A did not feel pressure from any of its corporate sponsors, who were subjected to the debate at the British Open.

“You can always ask that question: `Why now? Why not 10 years ago?’ The R&A have been considering this. It’s been on our agenda, on our radar, for quite some time,” Dawson said. “The feeling is as society changes, as sport changes, as golf changes, it’s something the R&A needs to do, and is doing now as being forward-looking as we can.”

The 2,400-member club and the group that runs The Open as well as the Rules of Golf are separate entities.

For years, the men-only Royal & Ancient was in charge of the Rules of Golf for every country in the world except for the United States and Mexico, which are governed by the USGA. And it operated the British Open, the oldest championship in golf.

Ten years ago, the administrative duties were split off into a corporate structure that is called “The R&A,” of which Dawson is the chief executive. That’s the group in charge of the Rules of Golf and organizing The Open and other R&A championships.

And while “The R&A” has female employees, its committee and board roles are populated by members of the Royal & Ancient Golf Club. So there are no women in leadership roles when it comes to rules and championship golf.

That likely will change with a favorable vote in September for female members.

“This is welcome news from the Royal & Ancient Golf Club of St. Andrews, and I urge its members to follow their committees’ recommendations and vote `yes’ for women members,” Grant said in a statement. “It would mark a step in the right direction for the sport and I would hope encourage the remaining golf clubs that still have anachronistic single-sex member policies to follow suit.”

While the members have access to the R&A clubhouse behind the first tee at the Old Course, R&A members belong to a club, not a golf course. The seven golf courses at St. Andrews are open to the public.