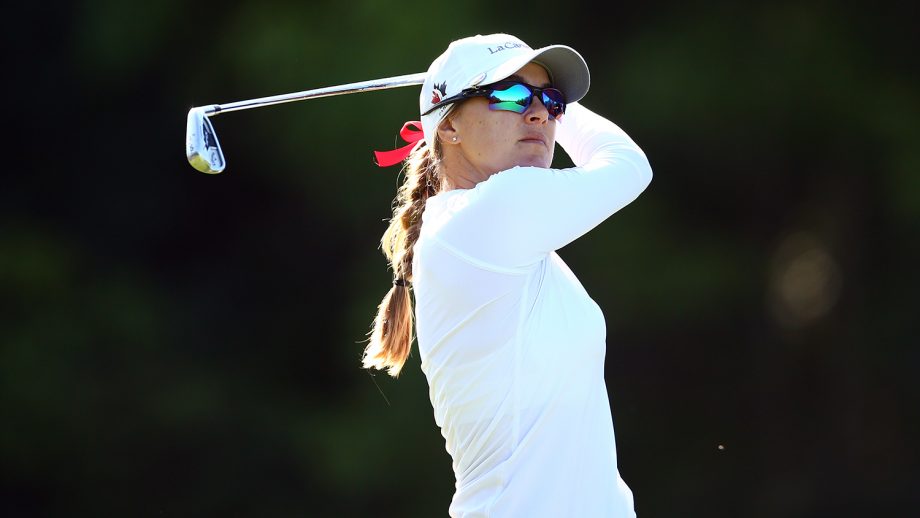 AURORA, CANADA - AUGUST 23: Anne-Catherine Tanguay of Canada hits her tee shot on the 8th hole during the second round of the CP Women's Open at Magna Golf Club on August 23, 2019 in Aurora, Canada. (Photo by Vaughn Ridley/Getty Images)
John Chidley-Hill/ Canadian Press

Anne-Catherine Tanguay was watching golf on TV from her home in Florida, taking care of her newborn daughter, when she realized she wasn’t done playing the professional game.

As the Canadian saw her friend Sophia Popov win the Women’s British Open in August, she knew she had to get back to playing competitive golf.

“That really gave me the golf bug, I just missed it,” said Tanguay. “I knew throughout my pregnancy that I wanted to come back but timing wise I thought I would evaluate in January, when the baby would be six months old.

“That was kind of my timeline and then with COVID-19 and everything we weren’t in a hurry. It just kind of worked out for me to come back now.”

The 30-year-old from Quebec City is in the field this week at the Symetra Tour’s Carlisle Arizona Women’s Golf Classic in Mesa, Az. When she tees off on Thursday, it will be her first competitive round since September 2019.

“It’s a lot of familiar faces, a lot of friends, everyone’s really happy to see the baby.”

Maddie Szeryk of London, Ont., Maude-Aimee Leblanc of Sherbrooke, Que., Brittany Marchand of Orangeville, Ont., Rebecca Lee-Bentham of Markham, Ont., and Samantha Richdale of Kelowna, B.C., are the other Canadian entries in the field for the opening event of the Symetra Tour season.

Tanguay had a career season in 2019, tying for 11th at the ShopRite LPGA Classic in June. Another highlight was tying for 44th at the CP Women’s Open that August at Magna Golf Club in Aurora, Ont.

But lingering injuries, including back problems, were hampering the newly married Tanguay’s play so she decided to take a step back from her career to focus on “personal projects” in October 2019.

Her daughter Livia was born in July and Tanguay resumed her training in February. Golf Canada women’s coach Tristan Mullally worked with Tanguay remotely, reviewing videos of her swing as she worked back into form.

Tanguay never stopped doing yoga, but she mixed in some weight training to help her get back into playing shape. She said that she had to be patient with herself as she resumed training after her pregnancy.

“Even though I stayed in shape, there are so many changes your body goes through,” said Tanguay.

“One of them was my core. Before it wasn’t something I didn’t really have to think about it to activate it but now I have to be conscious on every swing to activate it.”

Tanguay’s time off has also brought some personal perspective. Early in the 2019 season, she had said that representing Canada in the 2020 Tokyo Olympics was a goal. But a lot has happened in her personal life in the intervening two years and the COVID-19 pandemic has pushed the Tokyo Games to this coming July.

“I mean my goal is to enjoy myself out there,” said Tanguay of her upcoming season. “I think that’s my No. 1 goal. Obviously, I didn’t want to set too high expectations just because I’m coming back and I don’t know how it’s going to go.”