Preparing for a tournament 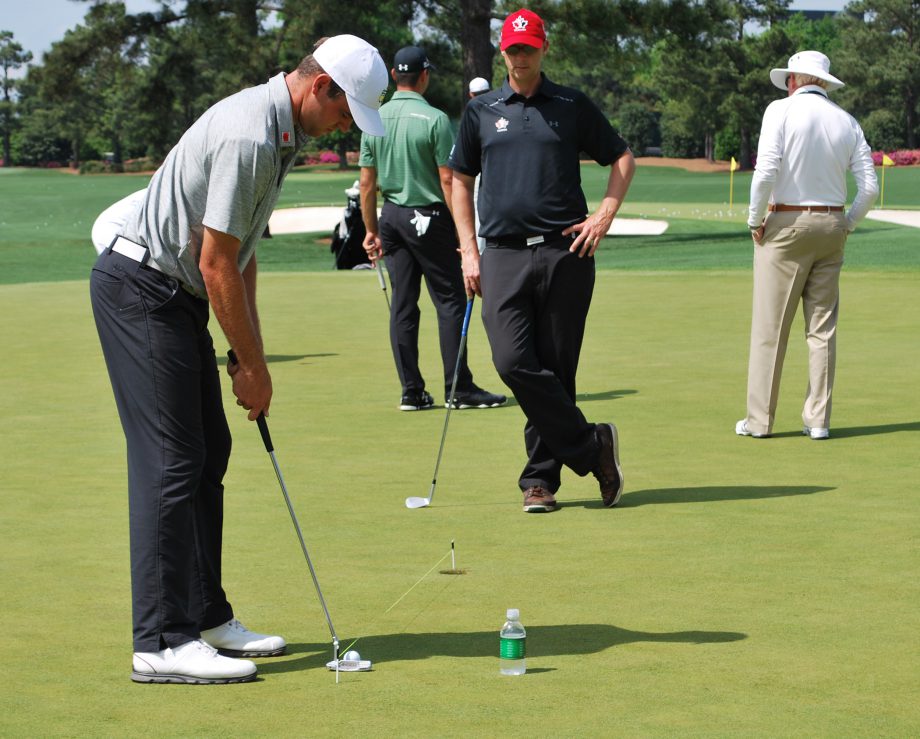 Imagine arriving at Augusta National for your Masters debut at 6:45 a.m. and getting ready to warm up.  Preparing for the day is a bit overwhelming if you have never done a similar warm up or you don’t have a set routine.  That is exactly what Corey Conners of Canada’s National Golf Team faced recently, but he was ready.

Warming up for your round is just that — it’s a tune-up for your mind and your body so you’re ready to play right from the opening tee shot.  For a competitive player, a typical warm up can last anywhere between 45 minutes to 1 hour and 15 minutes; Adapt the routine to the circumstances and to the facilities available.

Before you start, do a series of dynamic exercises to activate the body, get it ready to perform your best, and reduce the likelihood of injury.  Players on our National Team have an individualized series of movements that get them ready to compete that can start first thing in the morning before they get to the golf course, while others can do theirs on the range prior to hitting balls.

I like to have our players start the warm up by doing a few short range putting drills and getting a feel for the speed of the greens for about 10 minutes.  Then, they will go to the driving range to warm up the body and begin their long game warm up.

Start with your wedges to get loose. Hit a few light ½ and ¾ shots.  Then, work your way down your golf bag hitting two or three shots with the odd-numbered clubs: 9, 7, 5, 3-iron, 3-wood and a few more driver shots.  Then, work your way back up by hitting two or three shots with the even clubs starting with the hybrid, 4, 6, 8 and wedges.  Be sure to have a target for each shot and to occasionally change targets.  Finish off each club with a good shot prior to moving on to the next club.  Remind yourself if you are not hitting it exactly the way you want, that it’s just a warm up and you are preparing the body to play.  It’s a little like stretching prior to going for a run.  If your stretch doesn’t go well, does that mean you are not going to enjoy your run?

While moving through the bag, do your entire pre-shot routine on every third shot trying to simulate a shot on the course. I like to have the players on the National Team finish by playing the first two holes and the last two holes of the course they are about to play on the range – again – with a full pre-shot routine.  I want them to visualize being out on the course, picking the target they will be aiming at given the current wind conditions, and hitting their best shot.  Then, they’ll play their second shot from where the tee shot would have ended, again with complete pre-shot routine until the ball is on the green.  It is really important to warm up your mind and your body; playing a few holes on the range will get you ready.  After you have simulated playing the first couple holes and the last couple holes, hit a final first tee shot once more with your full routine.  Be sure to finish on an acceptable shot then move on to the short game area.  The long game warm up should take around 25 minutes.

Once in the short game area, hit a few pitch, chip and sand shots to get your contact solid and feeling ready.  Try to vary the lie and the hole you are hitting to so they are not exactly the same for each shot.  I love it when Corey [Connors] hits more random shots as opposed to hitting the same shot repeatedly.  Next, simulate a few greenside shots you could face on the course.  Do your full routine with one ball and mark and putt in out.  Do three or four up and downs so you are used to the routine of hitting the shot and putting out. You should get a decent feel for your short game in about 10 minutes.

Now head to the putting green to finish off your pre-round warm up; plan for another 10 minutes.  Take time to do a few short putting drills inside seven feet.  Corey uses a string and two spikes to practice starting the ball on line inside of eight feet on a straight putt.  Then, he will move to a left to right putt to practice starting the ball on his line and making some short breaking putts; he will also do the same on right to left putts.  After finishing up with a few more straight putts, he is really confident on those short need-to-make putts.

After the short putts, hit a few mid-length putts in the 10- to 20-foot range.  I like to have our players use only one ball, do a full read and their pre-putt routine to simulate what will happen during the round.  Then, similarly they can putt a few lag putts, and use their full routine and putt them out.  Last, it’s a good idea to finish with a couple more short putts and your full routine before heading to the tee.

Keep loose prior to hitting your first shot; it may be 20 or more minutes since you last hit a ball.  Take several deep breaths to keep relaxed—trying to inhale and exhale at the same rate.  Knowing you have prepared the best you can for the round, it’s now time to smile and just enjoy the competition.