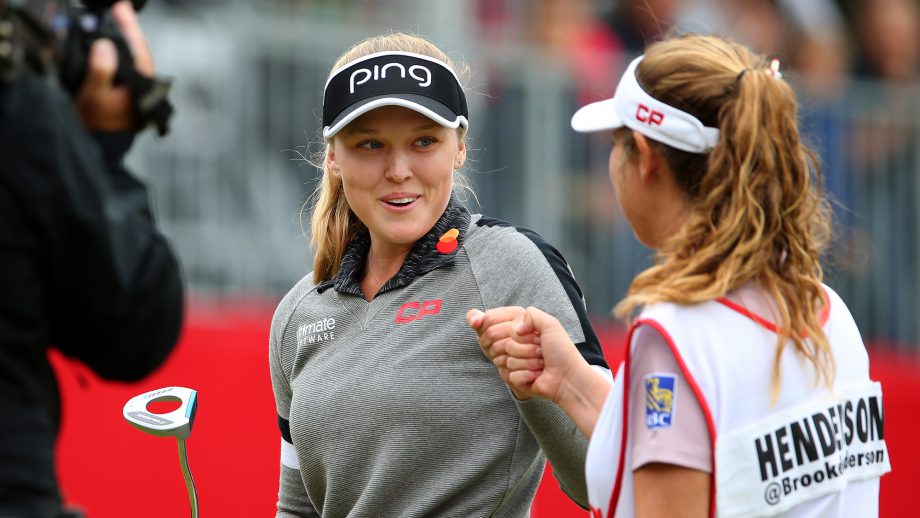 Brooke Henderson is now the undisputed monarch of Canadian golf. Her predecessors can’t wait to see what she’ll do next.

The 21-year old from Smiths Falls, Ont., won the Meijer LPGA Classic on Sunday to break the Canadian record for professional golf titles. The victory elevated her over Sandra Post, Mike Weir and George Knudson, who have eight wins apiece on their respective tours.

“I knew it was coming,” said Post on Monday. The Canadian Golf Hall of Famer noted that normally Henderson wins by a wide margin, rather than the one-stroke victory she earned over Lexi Thompson, Nasa Hataoka, Su Oh and Brittany Altomare. “I think I was looking at it as more a tournament rather than the ninth win because in my mind that was a given.

“I hope she goes to double figures with the wins and runs it up as high as she can for the next Canadian.”

Weir also wasn’t concerned about his record. Instead, he was excited to see an elite golfer at the top of her game.

“I don’t really pay that much attention to records and things like that, that’s more for other people’s water-cooler talk,” said Weir, also a member of the Canadian Golf Hall of Fame. “I just appreciate watching good golf and I appreciate excellence in all sports. When you see a player really excelling themselves and improving their own game and seeing them round into form, as Brooke has, it’s great to see.”

Although Henderson’s nine career wins is impressive, she is a ways off from reaching the all-time mark on the LPGA Tour.

Kathy Whitworth holds the all-time professional record with 88 wins on the LPGA Tour. Sam Snead has the most among men with 82. That record may fall, however, with Tiger Woods picking up his 81st PGA Tour win at this year’s Masters.

“Congratulations to ?BrookeHenderson on winning the #meijerlpga,” said Sorenstam, adding an emoji of a champagne bottle popping and a trophy.

Congratulations on making history, @BrookeHenderson! We can’t wait to see what’s next for you. ??⛳https://t.co/xalwKnhyGQ

Henderson also won the Lotte Championship in April in Hawaii.

“We don’t know what’s going to happen in sport this year, do we? It’s not an Olympic year, that’s a good thing,” said Post. “All I’m saying is that she’s got a good shot at it. But I think it’s great that we can have that conversation.”

Weir, who was awarded the Marsh in 2003 after winning the Masters, also likes Henderson’s chances.

“Her odds are great, she’s playing great,” said Weir. “There’s still a lot of the year left in other sports but clearly in the golf world Brooke’s setting herself apart from any other player, man or woman, in this country. She’d be a real deserving recipient.”