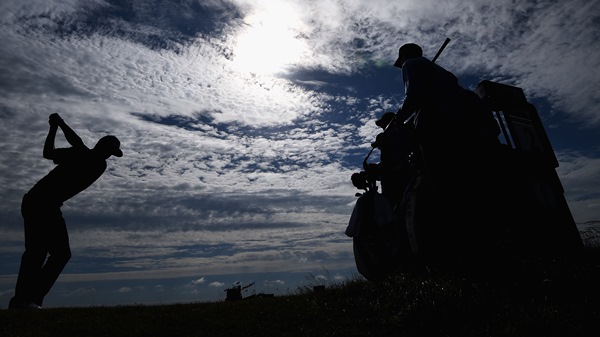 HOYLAKE, England – A man was arrested Wednesday on suspicion of assault after he took a golf cart from the course staging the British Open and drove it into a security guard, the second police intervention involving a wayward cart in consecutive majors.

The incident occurred at Royal Liverpool Golf Club about 7.30 p.m. local time (1830 GMT) at the end of the final practice day before the tournament begins Thursday.

Merseyside police said in a statement emailed to The Associated Press that a 45-year-old man from the local area took the golf cart from the course and collided with the guard, who sustained a slight leg injury.

Police said the man then steered the cart into a barrier near an entrance to the course in Hoylake.

“We can confirm that a man has been arrested following an incident at The Open golf practice day in Hoylake at about 7:30 p.m. this evening,” police said. “One man was arrested on suspicion of assault … Just before colliding with the barrier the buggy caught a security guard causing a slight injury to his leg.”

At the U.S. Open in June, a man who drove NBC Sports analyst Roger Maltbie’s golf cart during the third round at Pinehurst, North Carolina, was charged with assaulting a state trooper on the course.