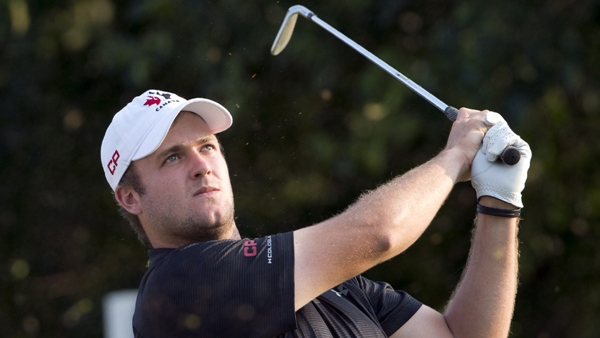 The UCLA senior, playing as an amateur this week before concluding his collegiate career later this spring, led by one over League City, Texas native Curtis Donahoe through 18 holes at the second of three qualifying tournaments for PGA Tour Canada this season.

“I made a lot of good putts today. The greens can be bumpy in the afternoon, so you just try to hit your line, and they might not fall, but luckily for me most of them went in,” said Pinizzotto, who played in the day’s final group off the 10th tee. “I gave myself a lot of good looks and I’m happy with how I played.”

The 22-year old began the week as an alternate and was practicing with teammates in Los Angeles on Monday when he received notification he was in the field – the last player among the 132 entrants to gain a spot for the week. After making the drive up and getting in a quick practice round in the evening, Pinizzotto was ready to begin his attempt to earn status for 2015.

“I was at practice Monday morning. I was going to head up here in the afternoon and see if there was a spot in the field, and then I got the call. It’s pretty last minute, but all week I was planning on getting in,” said Pinizzotto.

One stroke off the lead with a 4-under 67 was Donahoe, who was one of just three players to break 70 on the tricky La Purisima layout. Donald Constable also managed a 3-under 69 to join Pinizzotto and Donahoe.

“I hit a lot of fairways, a lot of greens and never really put myself in a bad spot. I got some putts to drop, so it was overall just really solid,” said Donahoe. “You kind of have to be in the right place, and if you’re in the wrong place you’re going to have a long day.”

Three-shots off the lead in a tie for fourth is Team Canada Young Pro Squad member Taylor Pendrith of Richmond Hill, Ont.