Piercy and Day tied for lead at Bridgestone 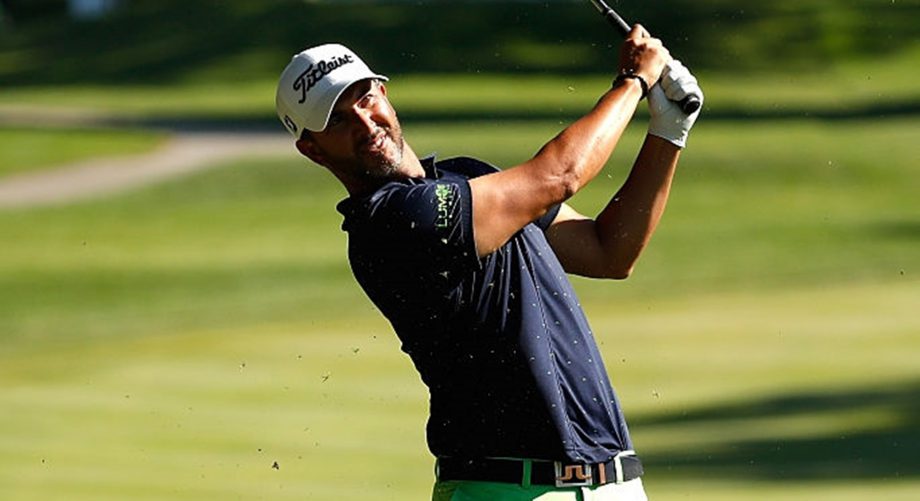 He was happy just to keep a share of it.

Spraying tee shots all over Firestone, Day spent most of the afternoon scrambling for par until he made a 35-foot birdie putt on the 15th hole that settled him down in a hard-earned round of 1-under 69 to share the lead with Scott Piercy.

“I felt like Mr. Haverkamp out of ‘Caddyshack’ trying to find his golf ball and not knowing where the golf hole goes,” Day said.

But he could find the bottom of the cup, including three par putts of at least 8 feet.

Piercy, coming off a runner-up finish in the U.S. Open two weeks ago at Oakmont, quickly tied Day for the lead with an eagle on the par-5 second hole and was flawless until the final hole. He had a one-shot lead until pulling his tee shot into the left rough, running a low shot through the green and into a back bunker, and having to scramble just to escape with a bogey and a 67.

Only nine players remained under par, and given the firm conditions of Firestone, Day believes all of them have a chance.

David Lingmerth of Sweden had a 69 and was one shot behind. The big move Saturday belonged to U.S. Open champion Dustin Johnson, who hits it a long way and has a short memory.

After warming up on the range, Johnson said he was ready for a great round of golf, adding that “I’m due.” The smile suggested he did recall that he played decently at Oakmont two weeks ago.

Johnson was 5 under through 11 holes and closing in on the lead when he played final seven holes in 1 over for a 66. Still, that was enough to get him to 2-under 208, three shots behind, along with Charl Schwartzel (67) and William McGirt (70).

Justin Thomas and Emiliano Grillo, buddies from their junior golf days, were another shot back. Thomas was in much better position until his wedge shot found the water on the par-5 16th, and his fifth shot after a penalty drop nearly went in for a par. Thomas then missed a 4-foot putt for double bogey.

The 16th also got the best of Jordan Spieth in a big way.

Spieth was starting to make putts when he debated whether to hit 3-wood on the 654-yard 16th hole, thinking he could keep it away from the water and try to make his birdie from the rough. He played it smartly instead by laying up, only it didn’t quite work out that way.

His third shot came up just short and into the water. His next shot went over the green and he couldn’t get up-and-down, making triple bogey.

Spieth said his caddie talked him out of the 3-wood, and he agreed.

“The big number only comes into play with a 3-wood,” he said. “It really was the right decision. It’s just funny how we talked about it like that.”

Spieth had another 71 and was five shots behind.

Piercy had no such issues. He holed a bunker shot on the second hole for eagle and didn’t have any stress in his round except for the 35-foot par putt he holed from the back fringe on the 14th hole. The final hole cost him the lead, but he is driving it well enough to think he has a strong chance to pick up his fourth career victory.

“I know I can do it,” Piercy said. “It’s just doing it on a consistent basis like a Jordan or a Jason and those guys.”

Day opened with a 20-foot birdie putt. He added a short birdie on the sixth hole. A three-putt bogey on the seventh was a nuisance.

What concerned him was a tee shot on the eighth that was meant to be a sweeping draw and turned into a shot deep into the trees for a bogey. And it didn’t get much better from there. He was in trouble off the tee on the next two holes and salvaged pars. He hit only three fairways in the round.

“Because I thought if I can just somehow get something in and give myself an opportunity for tomorrow … it’s very easy, hitting the positions I hit it today, to sit there and go, ‘Well, it’s just not my day or not my week’ and kind of switch off a little bit. But didn’t want to allow myself to switch off mentally.”