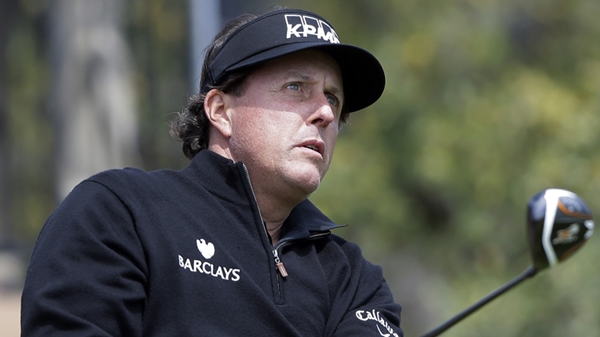 SAN ANTONIO – Long after the fog cleared at TPC San Antonio, Phil Mickelson remained shrouded in an increasingly alarming funk with the Masters two weeks away.

Mickelson shot a 5-over 77 on Thursday in the Texas Open to fall nine strokes back during the suspended first round. The 77 was Lefty’s highest score since a 78 in August in the PGA Championship.

“I had been playing real well at home, so to come out and play like this is disappointing,” Mickelson said. “Just didn’t feel quite sharp.”

In his previous two starts, Mickelson missed the cut in the Honda Classic and tied for 16th three weeks ago at Doral in the World Golf Championships-Cadillac Championship. He made his only other Texas Open appearance in 1992, so long ago that the event was only his 11th professional start on the PGA Tour.

Pat Perez and Danny Lee shot 4-under 68 to share the clubhouse lead and Andrew Loupe was 4 under with seven holes to play when darkness forced the suspension of play. The start was delayed 2 hours, 40 minutes because of fog, and 45 players were unable to finish the round.

Mike Weir opened with a 76, while Brad Fritsch was 5-over thru 12 when played was suspended.

Area resident Jimmy Walker had a 76. He has a tour-high three victories this season, winning the Frys.com Open, Sony Open and Pebble Beach National Pro-Am.

Mickelson hit half of the greens in regulation on the Greg Norman-designed T&T Oaks Course, bogeyed three of the four par 3s and closed with a double bogey on the par-4 ninth.

“I didn’t putt well,” said Mickelson, who had 17 putts on the second nine that he played in 4-over 40. “I had a couple of three-putts that hurt. Iron play wasn’t great. I didn’t drive it bad, until that last hole.”

On the 462-yard ninth, his drive sailed so far right he hit a provisional. He didn’t need it, but it took him three to find the green and he ended up three-putting, missing from 10 and 2 feet.

“Just blocked it,” he said.

He also will play next week in the Houston Open before heading to Augusta National.

The fog kept temperatures in the 50s before it burned off and gave way to sun and readings in the 80s.

“This morning it was freezing, and I hit balls (on the practice range) in four layers of clothes,” Perez said. “Now, I’m sweating.”

One under after a bogey on the 15th, Perez finished with three birdies on putts from more than 10 feet – including a 17-footer on the final hole.

Lee, the 2008 U.S. Amateur champion at Pinehurst No. 2, finished with consecutive birdies with putts inside 13 feet on the 17 and 18. He finished second three weeks ago in Puerto Rico.