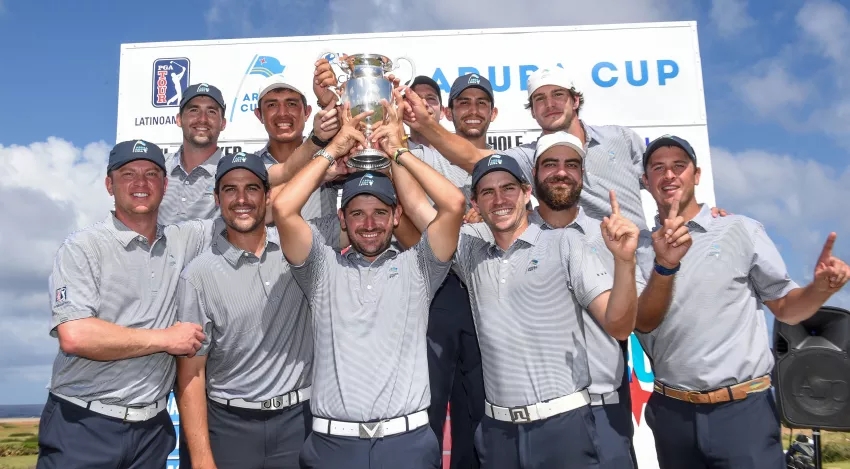 Though the Mackenzie Tour put together a valiant charge, winning five of the first seven singles matches of the day, it wasn’t enough to overcome a daunting 8.5-1.5 deficit, with Latinoamérica prevailing by a 13-7 final score over the three-day match play competition between the two Tours.

“Our guys fought back and made it interesting. It was good golf, and it was fun to see. It’s unfortunate the way it ended, but we rallied back and I’m proud of how our team played,” said Mackenzie Tour captain Stephen Ames, who offered his congratulations to the Latinoamérica team and his counterpart Julian Etulain. “I watched a lot of their golf, and they made a lot of putts. My hat’s off to Captain Etulain and his team on a great victory.”

Early on in Saturday’s singles play, it seemed as though a miracle comeback was in the works, as Dan McCarthy got things started with a win in the day’s first match – a battle of Players of the Year against Latinoamérica Order of Merit winner Nate Lashley.

Taylor Moore followed shortly after with a 2&1 win of his own over Seth Fair, and when a handful of other matches out on the course turned in favour of the Mackenzie Tour, the outcome of the event appeared in doubt for the first time since before one-sided fourball and foursomes matches of the first two days.

“All I could do being the first match out was beat my guy and hope everybody else followed suit,” said McCarthy, a four-time winner this year on the Mackenzie Tour. “We were in there for a while today and we almost pulled off the impossible.”

Although more matches went the Mackenzie Tour’s way – Brock Mackenzie clawed back to earn a half point after being three down with six to play, while Paul Barjon, Max Rottluff and Ryan Williams each won their matches – it wasn’t enough to overcome the deficit to start the day.

Martin Trainer notched the clincher for Latinoamérica, securing at least a half point by taking a 1 up lead to the 18th and then sinking a long birdie putt to defeat Michael Gligic 2 up and set off a celebration.

“I’m really proud of the team today. We fought hard and made it interesting at the end. It was a good team effort and a fantastic week,” said Williams, who beat Augusto Núñez 4&3. “It was great to play a team event. We’ve all had good years, and it was nice to come down here to Aruba and get together as a team. It was a real fun week and something I’ll remember for a long time.”