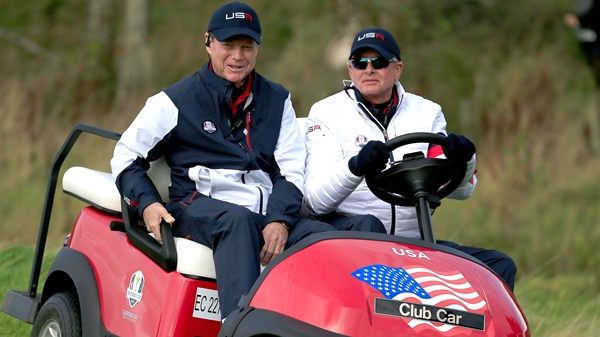 Poulter, a European stalwart with a 12-4-2 record in the Ryder Cup, was critical of both in his book, “No Limits,” which was released this week.

PGA President Ted Bishop was with Faldo on Thursday at The Greenbrier for the “Faldo Series” junior program when he tweeted to Poulter, “Faldo’s record stands by itself. Six majors and all-time RC points. Yours vs. His? Lil Girl.”

In a separate posting on his Facebook page, Bishop lamented that athletes who had “lesser records or accomplishments in a sport never criticized the icons.” He mentioned Watson’s eight majors and 10-3-1 record in the Ryder Cup, and Faldo’s six majors and record with most Ryder Cup points in history getting “bashed” by Poulter.

The PGA of America said Bishop “realized that his post was inappropriate and promptly removed it.”

Bishop said in an email Thursday night to The Associated Press, “Obviously I could have selected some different ways to express my thoughts on Poulter’s remarks. Golf had always been a sport where respect was shown to its icons. That seems to have gone by the wayside.”

Poulter had tweeted before leaving for China, “I guess we can only have opinions if you won a major or 6.” He was not aware of Bishop’s tweet until he landed and was inundated with messages.

Poulter said in a brief telephone interview that he was disappointed in Bishop’s tweet. He later released a statement to Golf Channel.

“Is being called a `lil girl’ meant to be derogatory or a put down?” Poulter said in the statement. “That’s pretty shocking and disappointing, especially coming from the leader of the PGA of America. No further comment.”

Watson benched Phil Mickelson and Keegan Bradley for both sessions on Saturday at the Ryder Cup as the Americans fell behind. He also played Webb Simpson, one of his captain’s picks, only once. Europe won 16 1/2-11 1/2, its eighth win in the last 10 Ryder Cups.

Mickelson indirectly criticized Watson in the closing press conference by saying the Americans had strayed from a winning formula and there was no room for player input under Watson’s captaincy. Watson later wrote an “open letter” accepting responsibility for his style.

Poulter in his book said that Watson’s decision-making “completely baffles me.” He was referring to benching Mickelson and Keegan Bradley on Saturday.

Faldo stirred up the European team on Friday when he said during his Golf Channel commentary that Sergio Garcia was “useless” in 2008 during the European loss at Valhalla and that he had a “bad attitude.” Faldo later explained in an interview with the AP that Garcia has emotional and physical problems and at one point told Faldo he didn’t want to play.

“Faldo has lost a lot of respect from players because of what he said,” Poulter said in his book. He noted that it was Europe’s only loss in the last 15 years and Faldo was the captain. “So who’s useless? I think Faldo might need to have a little look in the mirror.”

Poulter was a captain’s pick that year.

Bishop’s two-year term as president expires next month at the PGA annual meeting. Bishop chose Watson as the Ryder Cup captain – at 65, the oldest in Ryder Cup history. He recently announced a task force to help solve America’s recent losing streak in the Ryder Cup.