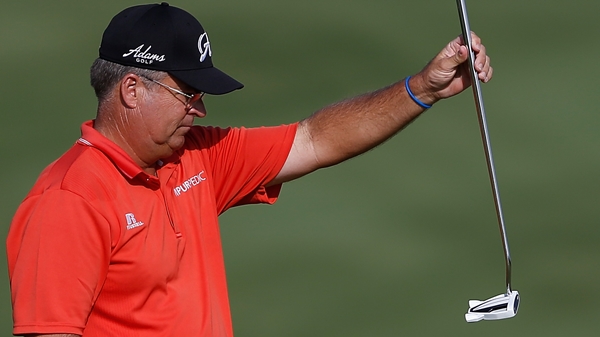 “Just a battle out there,” Perry said. “Greens are so hard, you really can’t control with the wind and altitude and the greens where you cannot fly the ball, you have to play everything 20, 30 feet short, bounce it up. With some of those pin placements, very tricky. I feel like I’m at a U.S. Open. It’s very hard to fit the ball near the holes so that’s why you see nobody really running away with it.”

The 60-year-old Haas, four strokes ahead after opening with rounds of 66 and 62 to break the tour record for consecutive rounds of par or better at 38, had a 75 to fall a shot behind.

“I wasn’t sharp, obviously, and it was a tough day weather-wise,” Haas said. “The wind was blowing a little bit harder coming from a different direction. I was just off just a little bit and that showed.”

Haas, the oldest player in the field limited to the top 30 on the money list, had a double bogey, six bogeys and three birdies. He hit a female spectator with a shot en route to a bogey on the par-5 eight.

“I felt awful, obviously,” Haas said. “I understand that she’s doing OK, but you know, if you’ve done it, you know what it feels like. It’s not a good feeling when she’s laying there bleeding and everything. … If I had been sharp, I would have hit the fairway there and not bothered her. So it’s probably her first and last time she’s ever been to a golf tournament.”

Haas won two weeks ago in North Carolina to become the 18th player to win a Champions Tour event at 60 or older. He has 17 victories on the 50-and-over tour after winning nine times on the PGA Tour.

“Frustrating that a good one would have given me a nice cushion,” Haas said. “It was a hard day. … Just one of those days.”

The 54-year-old Perry has seven Champions Tour after victories, winning the Regions Tradition in May for his third major title and the 3M Championship in August. He won 14-times on the PGA Tour.

“I hit the ball fine,” Perry said. “Didn’t make many putts, but I think the greens have a lot to do with it. All in all, I’m tickled to shoot 68. I’m just playing steady golf, hitting lots of fairways, lots of greens. … I think it will be exciting tomorrow. It’s anybody’s day tomorrow. I mean, you’ve got probably eight to 10 guys who have a very realistic shot of winning this golf tournament. It’s just one hot round.”

The 55-year-old Pernice won the Principal Charity Classic in Iowa in June for his third tour victory.

“We had a different wind,” Pernice said. “Obviously, brought a little bit of intrigue into most people’s game. You get a little bit of wind blowing and firm greens, it’s always going to be tough. Jay and I both struggled a little bit today, didn’t help each other out much, not much momentum going there. I played good at times. I had my opportunities, I just didn’t convert very well.”

Fred Couples and Colin Montgomerie were tied for fourth at 6 under. Couples, the winner last year at TPC Harding Park in San Francisco, followed his second-round 64 with a 69. Montgomerie had a 66.

Bernhard Langer was tied for 10th at 4 under after a 70. Langer won the Charles Schwab Cup points title last week, has a tour-high five victories – two of them majors – and also has wrapped up the season money title with $2,916,189.