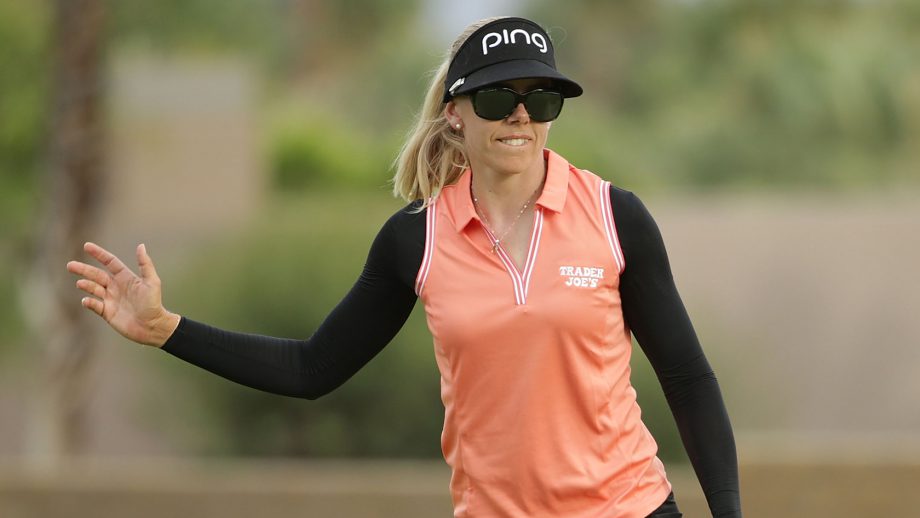 RANCHO MIRAGE, Calif. – Pernilla Lindberg glanced at Poppie’s Pond walking off the 18th green Saturday at the ANA Inspiration, knowing she put herself in perfect position to celebrate her first professional title with the traditional victory plunge.

“I’ve played a lot of golf in my life and I just feel like the pieces are kind of falling together,” Lindberg said. “I’m just letting it happen.”

The 31-year-old Swede shot a 2-under 70 on another hot and mostly calm day at Mission Hills, pulling away when playing partner Sung Hyun Park collapsed on the back nine.

“I felt calm out there. I had fun,” Lindberg said. “I went out there today and said, ‘How often do you get this chance? So I’m just going to enjoy it.’ And that’s what I did.”

Amy Olson was second after a 68. The 25-year-old former North Dakota State star – and the LPGA Tour’s only certified public accountant – also is seeking her first victory as a pro.

Lindberg was two strokes behind Park after the fourth-ranked South Korean player made her third straight birdie on the par-5 11th. They were then put on the clock for slow play, and Park dropped five strokes in the next five holes.

The U.S. Women’s Open champion bogeyed Nos. 12 and 13, had a double bogey on the par-4 14th after taking two shots to get out of the back bunker, and bogeyed the 16th.

“There were a bunch of fairways that I (missed), so that was something that I am disappointed in my shots,” Park said. “But I had a lot of great play, a lot of good aspects in my game.”

Lindberg scrambled for pars on the first four holes on the back nine, ran in an 18-foot birdie putt on 14 and made a 25-footer for par on 15 for a two-stroke swing. Lindberg bogeyed the par-3 17th and then hit a wedge to 5 feet to set up a birdie on the par-5 18th. She broke the tournament 54-hole mark at 14-under 202.

Park finished with a 74 to fall into a tie for third at 10 under. She shot a 64 on Friday for a share of the second-round lead with Lindberg.

“Definitely a much better putting day than the last couple days,” Inbee Park said. “Especially on the back nine, I was able to hit some good bunker shots and make those par saves.”

Lindberg made a 20-foot birdie putt on the first hole, bogeyed the par-3 fifth for her first dropped stroke of the week, and rebounded with a 20-foot par save on the par-4 sixth. The former Oklahoma State player added a 35-footer for birdie on the par-3 eighth.

“My putter obviously saved me a few times,” Lindberg said.

Olson, from Oxbow, North Dakota, had five birdies and a bogey. Ranked 218th in the world, she won an NCAA-record 20 titles for the Bison.

“You have to learn to win on every level,” Olson said. “I’m excited to be in the position that I’m in and just give myself a learning opportunity.”

Stanford sophomore Albane Valenzuela shot 71 to get to 7 under and top the four amateurs to make the cut. Minjee Lee also was 7 under after a 64, the best round of the day.

“The first two days I was hitting it really well, but I just didn’t make any putts,” Lee said.

Lexi Thompson was tied for 17th at 6 under after a 70. She won in 2015 and lost a playoff to So Yeon Ryu a year ago after being penalized four strokes during the final round for a rules violation the day before.

Michelle Wie was 2 under after a 72. She has fought dizziness caused by a virus.