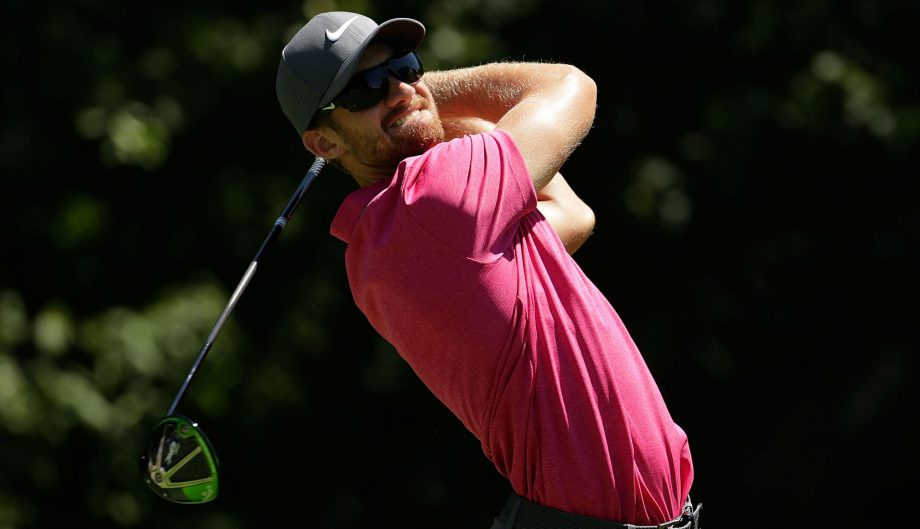 Patrick Rodgers is 18 holes away from his first PGA Tour win.

But the 25-year-old former Stanford star knows that it’ll likely take a lower score than the one he shot Saturday to secure such a milestone victory.

Rodgers shot a 3-under 68 in the third round, maintaining a two-stroke lead in the John Deere Classic.

Rodgers had a 16-under 197 total at TPC Deere Run. He’s trying to become the third player in five years to win the Quad Cities event for his first PGA Tour title.

“It’s going to be a shootout because there’s a lot of birdies to be made out here, and I’m going to have to make my fair share in order to stay at the top,” Rodgers said.

Nicholas Lindheim (66) was 13 under, and Jamie Lovemark (66), Bryson DeChambeau (70) and J.J. Henry (68) were another stroke back. Area favourite Zach Johnson had a 70 to drop five strokes back.

Rodgers, who opened with rounds of 65 and 64, was hampered by a pair of bogeys. But Rodgers also had five birdies, and he saved par on the 17th after hitting his tee shot into the gallery.

“I wasn’t as sharp as I was the past couple of days. So, I guess I did a good job mentally to get in at 3-under par,” Rodgers said. “All in all, if you told me at the start of the day that I’d have the same lead I started with, that’s a positive thing.”

Berger, who won the St. Jude Classic last month in Memphis and lost a playoff at the Travelers Championship in his last event when Jordan Spieth holed out a bunker shot, birdied seven of his first 11 holes. Six of those birdie putts came from inside 10 feet.

Berger and Rodgers are among four players with a tournament-high 19 birdies.

“In Memphis I drove the ball phenomenally. This week I haven’t driven it that well, but I’ve kind of kept it in play for the most part and I’ve made a bunch of putts, which has been the difference,” said Berger, one of only two players in the top 10 in the FedEx Cup standings in the field.

“I can’t control what anyone else does. I couldn’t event tell you some of the other guys that are on the leaderboard,” Stallings said. “We’ve gotten ourselves this far, and we’re happy to be in the position we’re in.”

Johnson, a Cedar Rapids, Iowa, native who won at TPC Deere Run in 2012 and notched six top-three finishes in his last eight appearances, again drew the biggest galleries. But he followed an eagle on the 14th hole with a double bogey on No. 15.

Bubba Watson’s decision to skip the Scottish Open for the chance to accumulate FedEx Cup points might not work out in his favour. Watson had a 68 and was tied for 57th at 6 under.

Kelly Kraft made arguably the day’s most impressive shot on No. 17. His tee shot landed on a walkway behind a hospitality tent, and Kraft hit his second shot over 200 yards and eventually saved par.