Patrick Reed leads after long opening round at Doral 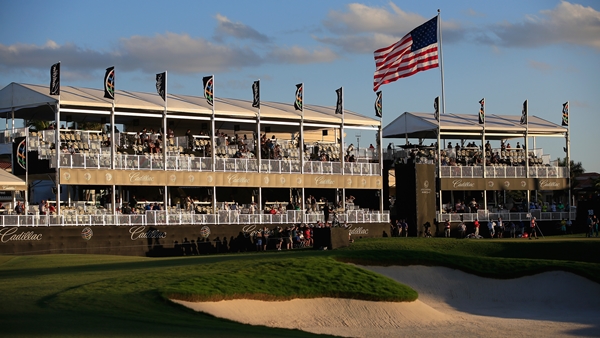 DORAL, Fla. – Patrick Reed ended a long opening round at the Cadillac Championship on Friday with a 4-under 68 to take a one-shot lead as the new Blue Monster showed some bite.

A four-time champion at Doral, the world’s No. 1 player finished off a 76 for his highest score in 40 complete rounds on the course. He wasn’t alone. Steve Stricker, the runner-up to Woods last year, had a 77. Masters champion Adam Scott took a big step back in his bid to reach No. 1 in the world with a 75. Four players, including former U.S. Open champion Webb Simpson, failed to break 80.

Graham DeLaet of Weyburn, Sask., opened with a 78.

Only six players finished the first round Thursday because of a storm delay lasting more than two hours.

The rest of the field who had to return Friday morning did not find typical peaceful conditions. Donald Trump, who bought the resort and brought in Gil Hanse for a complete makeover, described it as “bold.” In this wind, it was brutal.

Woods played with Scott and Henrik Stenson in the traditional grouping of Nos. 1-2-3 in the world. They all made double bogey on the 14th hole _ Woods from the middle of the fairway with what appeared to be a perfect shot into the green. It trickled into a back bunker, and he needed two to get out.

Stenson stopped walking off the 15th green and said, “Are you having fun watching?” And then he smiled as he looked back over his shoulder and said, “Because it’s sure as hell not any fun to be playing.”

Stenson, who had a shank on the second hole Thursday, birdied the 18th for a 73.

Harris English finished Thursday with a 69 (on a 45-foot birdie putt). He was joined by Francesco Molinari, Jason Dufner, Dustin Johnson, Matt Kuchar and Hunter Mahan. Rory McIlroy and Luke Donald were in the group at 70, along with Miguel Angel Jimenez, who had the most remarkable round. He didn’t make a bogey.

Another Spaniard wasn’t so fortunate.

Sergio Garcia was playing nicely until a 5-wood plugged in a bunker on the 16th hole, and he had no chance of getting out. His third shot flew over the green, over the corporate suite and into a water hazard next to the second green. He made triple bogey and went from a chance to break par to a 74.

“So much for being benign conditions in the morning,” Zach Johnson said after a 70.

Not only was it windy, it came out of the west. The course had been set up Thursday for a more southerly direction, and it showed. Dufner went over the 12th green in two with a 3-iron. Stenson, typically 30 yards longer off the tee, couldn’t reach with a 3-wood.

Zach Johnson needed a 3-wood to reach the side of the par-4 14th green, though he felt like Hercules on the 18th, usually the toughest on the Blue Monster. Johnson had a pitching wedge for his second shot.

The tough wind and the scores altered opinions about the new design.

“Certainly, people hitting greens, going in the water, that is certainly more of a case this year than it was in the old design,” Donald said. “Water is much more in play now on a lot more holes, and with shaved banks and greens this fast and decent slopes … as fast as greens are, there’s just nothing to stop it.

Woods didn’t show any signs of having back trouble, which led to him walking off the Honda Classic on Sunday after 13 holes. He showed his game wasn’t sharp, however, and in this wind, that was only exaggerated.

He started with a bogey from the bunker on No. 11. He missed a 4-foot par putt on the 13th. Woods threw his wedge against his bag on the 14th after being in an impossible spot in the bunker. His score might have been worse if not for three straight birdies.

He headed straight to the range to get ready for the second round, another 18 holes on a course that is giving most of the world’s best players fits.