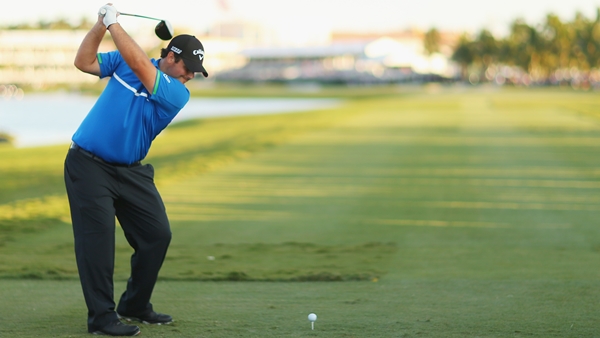 DORAL, Fla. – Patrick Reed turned his game around in four holes Saturday and wound up with a 3-under 69 in much tamer conditions at Doral, giving him a two-shot lead at the Cadillac Championship going into a final round that will prominently feature Tiger Woods for the first time this year.

Reed rolled in a 40-foot eagle putt on No. 8, and started the back nine with consecutive birdies. He drove the green on the par-4 16th for a two-putt birdie and wound up with a two-shot lead over PGA champion Jason Dufner (68) and Hunter Mahan, who bogeyed his last hole for a 71.

He made three birdie putts of about 15 feet or longer on the back nine, including a 35-footer down the slope on the par-5 15th, and had a 6-under 66. His goal was to get back to even par for the tournament and hope to be within five shots of the leader.

It turned out much better.

Woods was one of five players who were under par, and he goes into Sunday only three shots behind as he tries to win at Doral for the fifth time. Jamie Donaldson of Wales escaped from the palm trees right of the 18th and made par for a 71 to share fourth place with Woods.

“It was nice to get back in the tournament again,” Woods said.

Reed will be going for his third win in his last 14 starts dating to the Wyndham Championship in August. He was at 4-under 212, the highest score to lead after 54 holes at Doral since a three-way tie at 212 in 1985.

Asked what it would be like to see Woods in a red shirt ahead of him on Sunday, Reed didn’t seem bothered.

“That’s fine. I’ve seen Tiger a lot on the driving range. Never had the opportunity to play with him and I still haven’t been able to play with him,” he said. “Whenever he’s close to the lead, he’s a guy you have to watch out for. But at the same time, I have to go and just play my own game.”

Reed did that beautifully playing with Dustin Johnson, which he said is the reason he had his second 54-hole lead of the year. He earlier won the Humana Challenge.

The lack of big wind certainly helped with scoring and attitudes on Saturday. The average scores was 72.6, compared with 76.0 in the second round, allowing for plenty of movement on the leaderboard on a sunny afternoon in Miami.

A dozen players were within five shots of the lead going into Sunday.

Dustin Johnson failed to birdie three of the par 5s and chopped up the 14th hole, which featured one shot he hit left-handed. He birdied the last hole for a 73 that put him at even-par 144, along with Miguel Angel Jimenez (69) and Zach Johnson (71).

Jimmy Walker, already a three-time winner this season who is starting to feel like contending is a habit, had a 67 and was in the group five shots behind with Bubba Watson, Graeme McDowell and Matt Kuchar.

“The tournament will not be over until the last putt drops on 18,” Mahan said. “That always happens, but it seems like you just can’t coast in here. You can’t have a big enough lead going into 18 this week. So I don’t think anyone is going to be too bothered if someone gets out to a three- or four-shot lead, because there’s so much golf out there. And there’s so much that can happen – good and bad.”

And it did on Saturday.

Woods made his move early and late, pouring four birdies in eight holes to go out in 33. Looking confident with the putter, he made birdie putts of 15 feet on No. 11, 20 feet on the par-5 20th, and then followed his long birdie putt on the 15th with a bunker shot that narrowly cleared the clip and settled a few feet away for birdie on the 16th.

His only blunders came on par 3s – a three-putt bogey on No. 4 and taking two shots to get out of the bunker on No. 13.

“I held it together yesterday – a long day, tough day – and that gave me a chance today,” said Woods, who scratched out a 73 in the second round. “I figured, `Hey, I’m only six back. That’s definitely doable, especially with the conditions and how difficult this golf course is playing. If I just get back to even par for the tournament, I’ll be right there.’ And I did one better.”

Rory McIlroy did not. The two-time major champion was only one shot out of the lead when he went just long on the seventh hole with a pitching wedge and made bogey. He then hit into the water on the par-5 eighth with his second shot, and the par-5 10th with his tee shot. He made double bogey both times and only a chip-in birdie on the 18th salvaged his hopes. He had a 75 and was seven shots behind.

Much like Reed, Dufner did his damage in one stretch. It started with a shot that kissed off the pin on No. 5. That was the start of six birdies in eight holes, though he had to settle for six pars at the end.

Graham DeLaet (70) is 4-over par for the championship and is tied for 21st.