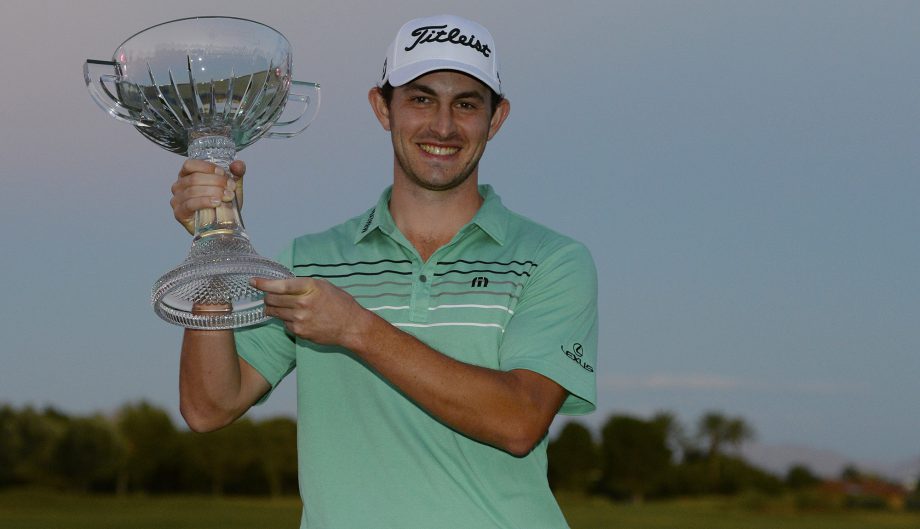 LAS VEGAS – Patrick Cantlay won the Shriners Hospitals for Children Open on Sunday in a playoff for the first victory in a PGA Tour career mostly derailed by a severe back injury.

The 25-year-old former UCLA star hit from behind a tree and got up-and-down for par from off the back of the 18th green to beat Alex Cejka and Whee Kim on the second extra hole.

Cantlay bogeyed the final two holes of regulation for a 5-under 67 to get in at 9-under 275 at windy TPC Summerlin. Cejka shot a 63 more than two hours before Cantlay and Kim – playing together in the third-to-last group – finished the round.

The three played the 456-yard, par-4 18th twice in the playoff, matching bogeys the first time. On the second extra hole, Cantlay escaped the trees in the right rough, hitting a 4-iron from 185 yards.

“I felt like as long as I kept it below the tree branch that was in front of me and cut it enough, I felt like it would go in a pretty decent spot,” Cantlay said. “I maybe didn’t cut it as much as I wanted to. I think the rough stopped it from being able to spin and get any cut on it, but it ended up in a good spot. It was a good shot.”

Kim bogeyed 18 in regulation for a 66, then went bogey-double bogey on the hole in the playoff.

“It was brutally tough,” Kim said. “The wind is blowing, and it’s really tough.”

Cejka birdied the final four holes in regulation for a back-nine 30.

“It was looking very slim, and then the wind picked up,” Cejka said about the getting in the playoff. “Luckily, the guys were dropping shots and I had the chance. But, you know, it’s a tough hole here. You’ve got to win with a par. I made two bogeys in the playoff, so that’s a little bit disappointing.”

“It’s tough to play at home,” Cejka said. “There is a lot of pressure, and people expect good things from you.”

Cantlay broke through to win after a remarkable return last season from the back problems. Out of golf since 2013, he didn’t miss a cut and made it to the Tour Championship while playing only 12 events. Part of that was due to an ankle injury that slowed him for two months.

“There’s not a lot of give up in me,” Cantlay said. “I never really thought about giving it up. I thought maybe there was a chance my back would never feel good enough to play again. But, fortunately, I feel great. I have a good program. I figured out a way to feel good all the time. It’s all good. I’m happy to be playing.”

Cantlay didn’t decide to enter Las Vegas a week ago Friday when he was at the HSBC Champions in Shanghai. He earned $1,224,000, a two-year exemption and moved into the top 50 in world.

“Goals for the rest of the season, definitely majors,” Cantlay said. “It will be nice to be into all of those, and making it all the way to the FedEx final and playing well in those events, those are big. First time playing last year, and really realized the gravity of them, and would like to do well and compete there, too.”

Cantlay birdied Nos. 11-14 before the sloppy finish in the difficult conditions.

“The last four, with the wind kicking up, that wind in and off the left on 18 makes that hole particularly difficult, and I was just trying to hit quality shots all the way to the end,” Cantlay said. “The finish did not happen how I thought it would, but it was just enough.”

Patton Kizzire (64), J.T. Poston (66) and Chesson Hadley (68) finished a stroke out of the playoff. Hadley bogeyed the 18th in the second-to-last group.

Beau Hossler, tied for the third-round lead with J.J. Spaun, had a 73 to drop into a tie for seventh at 7 under with Bryson DeChambeau (67) and Tom Hoge (69).

Spaun played the final four holes in 5 over for a 74. He bogeyed the 15th and closed with two double bogeys to drop into a tie for 10th at 6 under.