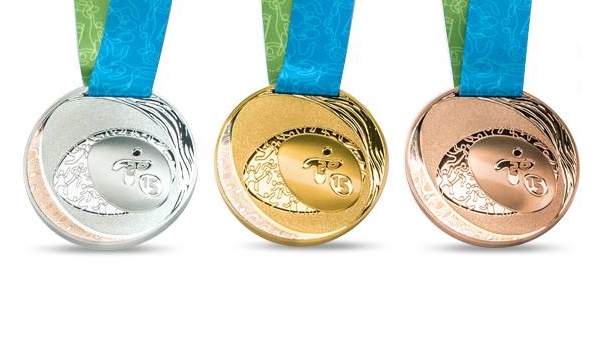 TORONTO — The Toronto 2015 Pan Am/Parapan Am Games Organizing Committee (TO2015) has unveiled the competition medals for this year’s games. Athletes from 41 countries and territories across the Americas will compete for 4,283 medals in 825 medal events. For the first time ever, golf will be included in the games for 2015.

The Toronto 2015 medals were unveiled at the Royal Ontario Museum today in a ceremony hosted by Canadian Olympic gold medallist Mark Tewksbury.

“I still feel a sense of pride and accomplishment every time I share my gold medal from Barcelona,” said Tewksbury. “These Toronto 2015 medals are pieces of art in their own right, and reflect all the hard work, dedication and the difficult journey athletes will take to wear one around their neck and cherish for life.”

“The Games unite us, inspire us and captivate us, and it’s the competition — the elite athletes striving for a moment of near perfection — that make it all so thrilling,” said Saäd Rafi, chief executive officer, TO2015. “So, we’re grateful to all our partners for striving for that same level of excellence in our medals.”

For athletes, the path to international sport usually begins in their hometown. Skill and athleticism propel them to the next level. And it is a similar journey for the medals that they strive to achieve. Starting in local mining communities where the raw materials for the Toronto 2015 medals begin their journey, forged by skilled hands, hard work and civic pride.

The materials for the medals were supplied by Toronto-based Barrick Gold Corporation from three of its operations across the Americas: copper from its Zaldívar mine in Chile; silver from its Pueblo Viejo mine in the Dominican Republic; and gold from its Hemlo mine in Ontario.

Just as athletes hone their skill with hours of training, the unique Games medals will be skilfully crafted by the Royal Canadian Mint in an innovative process featuring 25 production steps. The process involves 30 Mint employees, including engineers, engravers, die technicians, machinists and production experts working together. The team’s combined experience in medals production totals more than 100 years.

Each of the 4,283 competition medals is truly unique. Learn more about the making of the medals at mint.ca/TO2015.

“That moment of glory on the podium is the result of years of training and preparation, so I am very proud that TORONTO 2015 and its partners dedicated so much thought, effort and passion into designing such beautiful and substantial medals that embody the commitment and courage of the athlete who earned it,” said Curt Harnett, Team Canada’s chef de mission for the TORONTO 2015 Pan Am Games.

The Toronto 2015 Pan Am/Parapan Am competition medals will be on temporary exhibition at the Royal Ontario museum from Saturday, March 14 through Sunday, March 29. During the Games, they will be available for public viewing at the Royal Canadian Mint pavilion at CIBC Pan Am Park.

The golf competition will be contested July 16-19, 2015 at Angus Glen Golf Club in Markham, Ont.