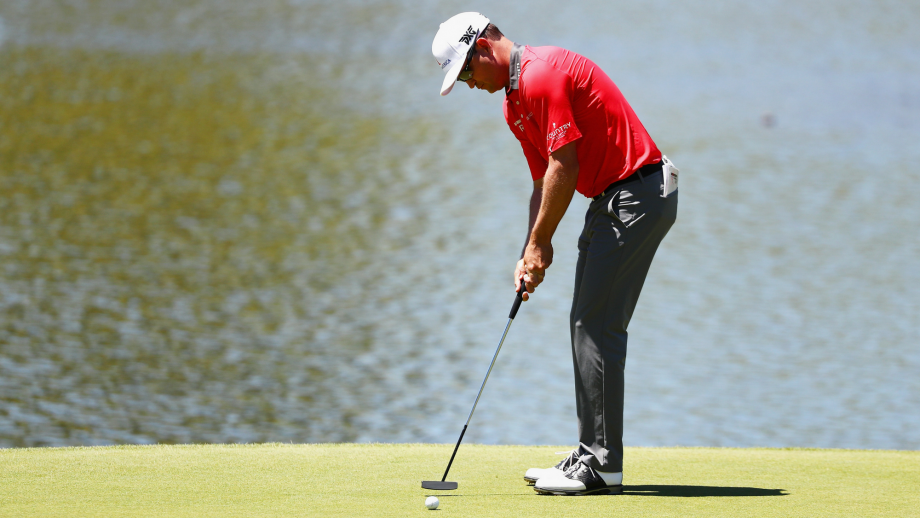 CROMWELL, Conn. – Jordan Spieth has no idea what it is like to play from behind at the Travelers Championship.

The defending champion led after every round last year in his first visit to TPC River Highlands, and a shot a 7-under 63 on Thursday to match Zach Johnson for the first-round lead.

Spieth had six birdies and an eagle out the bunker on par-5 sixth hole _ a shot reminiscent of the greenside bunker shot that gave him a victory last year over Daniel Berger in a playoff.

“They’ve got some sort of magnetic sand for me,” Spieth joked. “But it was actually a pretty tough shot there, almost a little downslope and I had to hit close to the ball, which you just have to commit to it. I just hit the shot that was necessary. I probably could have gone 4-5 feet bye, but I couldn’t hit it any better than I did and I was obviously fortunate for it to hit the pin and go in.”

Johnson went out in the morning and led for most of the day. He had eight birdies, including six straight on the back nine, one off than the course record.

“Six in a row is a treat,” said Johnson, who finished tied for 12th last week in the U.S. Open at Shinnecock Hills. “I had a lot of loft in my hand, lot of wedges in my hand. So that’s kind of how you’ve got to think about it is you have a lot of opportunity on the back side if you get the ball on the fairway. There are some holes you can get at.”

Rory McIlroy missed a 13-foot putt for par on the final hole that would have given him a share of the lead and finished in a three-way tie for third place with Brian Harmon and Peter Malnati.

McIlroy, who like Spieth missed the cut in the U.S. Open, said he’s been working on his swing since Saturday. He saw the practice pay off, hitting 17 greens with seven birdies during his round of 64.

“Sometimes when you take your focus away from the result and away from what you’re actually scoring like and focus just on what you’re trying to do within your golf swing, you sort of have days like this,” he said.

A lot of golfers took advantage of the soft greens and favourable wind conditions Thursday. Twenty-two of them shot a 66 or better.

Brooks Koepka followed his second straight U.S. Open victory with a 68. Koepka, who started on the 10th tee, shot a 31 on his first nine, but bogeyed four of his final six holes.

“I’m still kind of going on adrenaline right now,” he said. “But I’ll be honest, I’m dead right now. I think it showed kind of coming in.”

The Travelers was selected by the PGA last year as its “Tournament of the Year” and the “Players Choice.” That has helped attract a 156-player field that includes five of the world’s top 10 ranked golfers and all four reigning major championship winners.

PGA Championship winner Justin Thomas was in a group of 14 players at 66. He made an eagle on sixth hole out of the same bunker as Spieth. His caddie tried to hand him a putter after the shot and Thomas shook him off.

“I don’t know why he did that,” Thomas said. “I think out of instinct went to give me the putter and I told him I didn’t need that, so put it back in the bag.”

Masters champion Patrick Reed had a tougher day, making four bogeys in a 72.

Mackenzie Hughes of Dundas, Ont., shot a 67 to settle in a tie for 23rd, one point ahead of Adam Hadwin of Abbotsford, BC tied for 37th. Corey Conners of Listowel, Ont., sits tied for 77th at even-par 70, while Ben Silverman of Thornhill, Ont., tied for 99th at 1 over and Nick Taylor of Abbotsford tied for 114th at 2 over.