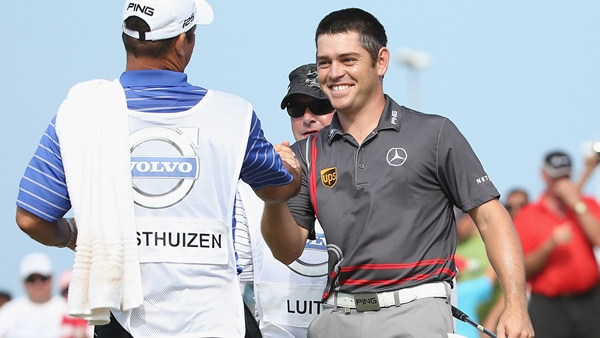 The 2010 British Open winner shot a 4-under 68 for an overall 12-under 276 and claimed his seventh win on the European Tour.

Oosthuizen finished a stroke ahead of fellow South African Branden Grace, who also shot a 68 on the Durban Country Club course.

It was Oosthuizen’s first success since winning this elite 36-player event a year ago.

After a slow start, with pars on the opening seven holes, Oosthuizen sank a 12-foot eagle putt at the par five No. 8.

He drew level with Grace with a birdie at the 17th and then claimed the win by holing a 2-foot birdie putt at the last.

“When I eagled the eighth hole I felt I could go on and make a few birdies from there on and, while stopped by a bogey on 10, I just felt really comfortable out there,” Oosthuizen said.

“I noticed when I was about to play my shot at 17 that Branden had finished on 11-under par, so I needed to give myself a good opportunity to tie him and I did and then managed to birdie the last.”

Oosthuizen came into the event with a persistent lower back injury.

“I’ve still got a few niggles that I need to work on with my back, but it’s been great this week and not causing me much concern,” he said.

Grace recorded his best finish in more than a year after winning four times in 2012, including starting that year with a Volvo Champions success, but then going without a win in 2013.

The 25-year old Grace capped his round with three birdies in succession at the sixth hole and then birdied two of his closing three holes.

“I thought I played some superb golf today,” Grace said.

Triple Major winning Padraig Harrington (67) was tied fifth on 9 under, his best effort since fourth in Durban a year ago.