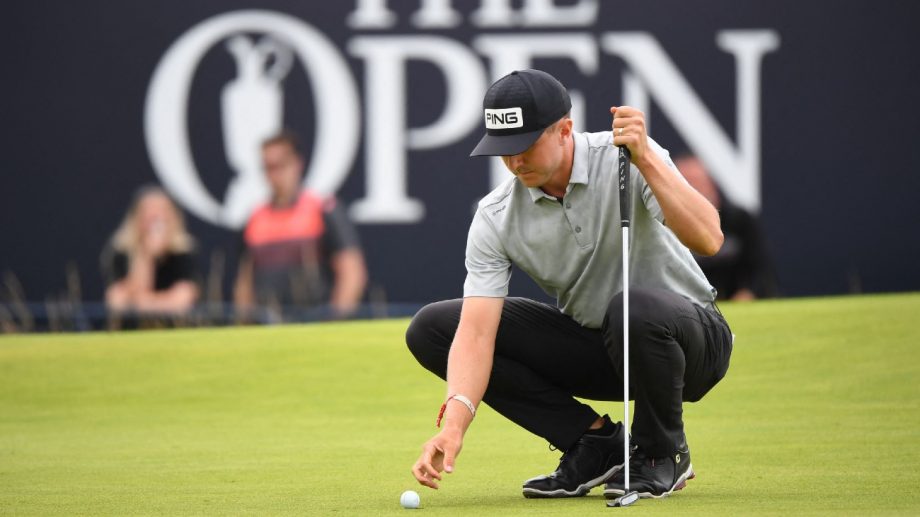 SANDWICH, England – Jordan Spieth rolled in putts like it was 2017. Louis Oosthuizen put those runner-up finishes in the last two majors out of mind and soared to the top of the leaderboard. They gave the British Open a familiar feel on Thursday.

Normalcy returned to the wind-swept links at Royal St. George’s in other ways, too.

The roars and cheers of the biggest golf crowd since the pandemic rumbled around this quirky course off Sandwich Bay, just like pre-COVID times.

For Spieth, that was as welcome as being an Open contender once again.

His 5-under 65 certainly turned back time to four years ago when he lifted the claret jug at Royal Birkdale the last English venue to host the British Open when he was hitting the ball better than he ever has.

Spieth was a shot off the lead held by Oosthuizen, who saved par from a fairway bunker on No. 18 for a 6-under 64. That tied the lowest opening round at Royal St. George’s, previously set by Christy O’Connor Jr. in 1981.

That didn’t look as though it would be the case after the South African opened with seven straight pars. He followed with six birdies in his next nine holes.

“I’ve learnt over the years playing major championships that patience is the key thing,” said Oosthuizen, who hasn’t won one of them since the British Open at St. Andrews in 2010. There have been six runner-up finishes in the majors since then, including in the last two.

Oosthuizen and Spieth were among the morning starters who enjoyed the best of the conditions, notably soft bounces on the most undulating fairways and greens on the Open rotation.

Mackenzie Hughes of Dundas, Ont., started early and opened with a strong round of 4-under 66, good for a tie for fourth. His day included three straight birdies on holes 4-6.

Yet many of the world’s best couldn’t take advantage.

Patience already might be wearing thin for U.S. Open champion Jon Rahm, who slapped his thigh in frustration after making a double-bogey at No. 9, where he took two shots to get out of a pot bunker in the fairway. He shot 71, like Bryson DeChambeau, who spent much of his first round up to his knees in deep grass and cursing his driver, saying it “sucks” after being unable to use his power to overwhelm Royal St. George’s.

Shane Lowry, the Open winner in 2019, also shot 71 in front of a crowd that has a daily capacity of 32,000 this week. Not since Royal Portrush, where Lowry won, has any golf tournament seen so many spectators through the gates.

With last year’s event canceled because of the pandemic, Lowry could finally be announced at an Open as the reigning champion golfer.

Not so for the majority of the afternoon starters, who encountered more prolonged gusts off the English Channel and slightly drier conditions.

Rory McIlroy birdied the last to salvage a 70 in his bid for his first major title in seven years. Justin Thomas shot 72. Phil Mickelson shot 80, his highest start ever in the British Open, that left him tied for last place.

Benjamin Hebert and Webb Simpson, with rounds of 66 that tied them for fourth place with three others, had the best scores from the afternoon. Former PGA champion Collin Morikawa, in his first links test, and English favorite Tommy Fleetwood were at 67.

Fleetwood would like nothing more than to become the first Englishman with his name on that silver jug since Nick Faldo in 1992.

“It’s been a long time since an Englishman has won the Open, and I would love to be the next one. So we’ll see,” Fleetwood said.

Corey Conners of Listowel, Ont., opened at 2 under, while Adam Hadwin of Abbotsford, B.C., and Toronto’s Richard T. Lee were at 5 over.

Brian Harman was tied for second with Spieth after making five birdies in his first eight holes and finishing with a 65. Top-ranked Dustin Johnson hit 14 greens in regulation and said he was pleased with his round of 68 that had him in a tie for 19th.

Spieth had not won since Birkdale until he ended his slump at the Texas Open in April. He looked the happiest of anyone Thursday, saying he liked where his game was at after matching his lowest score at an Open. He also had a 65 on the first day at Birkdale.

And he made reference to that victory while running off four straight birdies starting at No. 5, telling former caddie John Wood part of the U.S. broadcast team that it was just like 2017 the way he was making putts and Wood was watching him. Wood was caddying in the final round at Birkdale for Matt Kuchar, who was second.

It was only Oosthuizen ahead of him. And that was no real shock, considering the South African was tied for the lead in the first and third rounds at last month’s U.S. Open and in the second round at the PGA Championship in May.

The return of the spectators made it feel like a proper Open, especially on the hill overlooking the par-3 6th hole that attracted some of the biggest galleries of a day that started with a blue, cloudless sky.

Just before midday, the group containing Stewart Cink, Lee Westwood and Martin Kaymer all hit tee shots inside 6 feet of the pin. As they walked onto the green, one spectator shouted: “You three should be professionals.”

To which Kaymer’s caddie, Craig Connolly, replied back across the green: “You should be a comedian.”

“I feel like the fans here are very knowledgeable about the sport,” Spieth said, “and they’re also having a great time.”