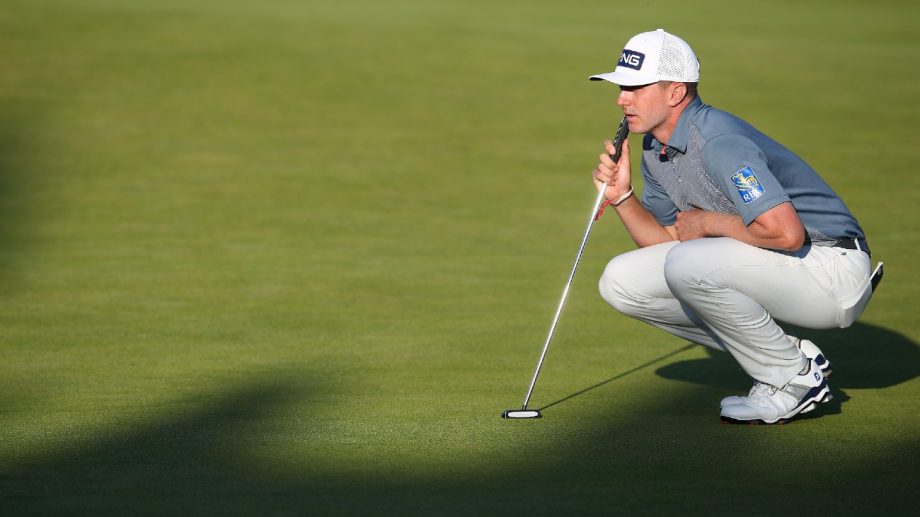 SANDWICH, ENGLAND - JULY 16: Mackenzie Hughes of the USA lines up his putt on the 18th hole during Day Two of The 149th Open at Royal St George’s Golf Club on July 16, 2021 in Sandwich, England. (Photo by Christopher Lee/Getty Images)
Canadian Press

SANDWICH, England (AP) – Louis Oosthuizen set a 36-hole record at the British Open and is halfway to ending that run of near misses at the majors.

He’ll have to hold off a cast of major champions on the weekend at Royal St. George’s.

On a day of pleasant summer weather that took the fear out of the links off Sandwich Bay, Oosthuizen broke away from a three-way tie with a birdie-birdie-eagle run from the 12th hole. He shrugged off his first bogey of the week for a 5-under 65 and a two-stroke lead on Friday.

Former PGA champion Collin Morikawa had a 64 and was two shots behind.

Another shot back was Jordan Spieth (67), going after his fourth major.

Lurking was two-time major champion Dustin Johnson, the No. 1 player in the world, who shot 65.

Oosthuizen was at 11-under 129, breaking the 36-hole Open record first set by Nick Faldo in 1992 at Muirfield and matched by Brandt Snedeker in 2012 at Royal Lytham & St. Annes.

This will be the fifth time in the last nine rounds at a major that Oosthuizen, the 2010 Open champion at St. Andrews, has had at least a share of the lead. He was runner-up at the last two majors, to Phil Mickelson at the PGA Championship in May and to Jon Rahm at the U.S. Open last month.

He’ll also be aware of the quality of player behind him, though.

Morikawa, making quite a debut in links golf, made seven birdies in his first 14 holes as part of a clinic in iron play. He missed a 5-foot par putt on No. 15 and had a 10-foot birdie putt on the final hole catch the lip.

Spieth, four shots behind when he teed off, was tied for the lead after 12 holes and then played the last six holes in 1 over.

Then there was Dustin Johnson, a runner-up at Royal St. George’s in 2011, who stuck his approach at the last to 3 feet for a birdie and a round of 65, which left him tied for fourth place at 7 under with Dylan Frittelli of South Africa (67) and Scottie Scheffler (66).

One shot behind an eclectic mix of players at 6 under including two more South Africans in Justin Harding and Daniel Van Tonder were Rahm (64), Brooks Koepka, and MacKenzie Hughes of Dundas, Ont. (69). Listowel, Ont.’s Corey Conners had his second straight 68 to sit at 4 under.

After Friday’s round, both Canadians are sitting in the top 20, Hughes is tied for the 12th spot with Conners close behind tied for 17th.

Koepka made four birdies in his last five holes for a 66, then continued his petty feud with Bryson DeChambeau with perhaps the best shot of his round.

During a television interview, Koepka said he was driving it great, adding: “I love my driver” a clear nod at DeChambeau, who complained on Thursday that his driver “sucks.”

DeChambeau just made it to the weekend at Royal St. George’s by shooting a 70, which saw him make the cut on the number at 1 over.

Rory McIlroy did, too, needing a birdie on the final hole for another 70. He was 11 shots behind.

Other big names weren’t so lucky: No. 7 Patrick Cantlay, No. 9 Patrick Reed, former Open champions Francesco Molinari and Henrik Stenson, and Darren Clarke, the 2011 champion at Royal St. George’s, were all headed home.