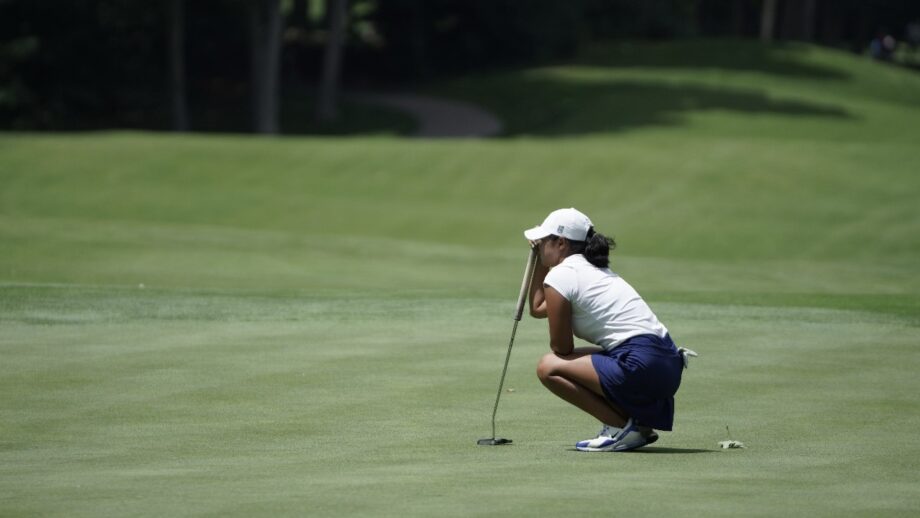 Monet Chun stares down a par putt on the 18th green at Westmount Golf & Country Club during the third round of the 108th Canadian Women's Amateur Championship.
Golf Canada

KITCHENER, Ont. – Thursday was all about Monet Chun at Westmount Golf & Country Club.

Chun charged into the lead with a bogey-free, seven-under par 66 on moving day at the Canadian Women’s Amateur Championship, presented by BDO, and holds a six-stroke lead ahead of Friday’s final round, with the Duchess of Connaughton Gold Cup and a spot in the CP Women’s Open at stake.

“I was just trying to make up strokes from yesterday, but I hit the ball well [and] putted well today so I was pretty happy overall,” said Chun. “I had a couple of tough chips out there, left a little bit of long putts like on 18 here, but I was just putting together a good round today so I’m pretty happy about that,” added a humble Chun.

Within minutes of finishing a disappointing round of three-over par 78 on Wednesday, Chun darted to the range to fine-tune some swing mechanics. Needless to say, the practice paid off on Thursday.

“I missed a couple left yesterday and I’ve been working on that for quite a long time now so it’s nothing new. I kind of worked on it a little bit yesterday and it obviously helped today,” said Chun

The best of the 21-year-old’s seven birdies on the day came at the par-4 15th, where she chipped in from behind the green. With a downhill lie, the Team Canada member lofted a wedge onto the putting surface and watched as it broke toward the pin and drop into the hole.

Chun, who is as even keeled as they come, couldn’t help but crack a smile after that one.

The Richmond Hill, Ont. native, who sits at five-under on the tournament, was part of an all-Team Canada pairing today, playing alongside Céleste Dao and Yeji Kwon. Chun admitted that being grouped with familiar faces and having her coach follow along today allowed her to settle in more comfortably on yet another gusty day in Kitchener.

“For sure there’s a factor in that. I’ve played with Céleste for forever now, so being with her out there was very helpful.”

Earlier in the day, Vanessa Borovilos stormed up the leaderboard with a round of four-under par 69 that saw the 16-year-old record eight birdies. Borovilos sits T6 ahead of the final round, eight strokes back of the leader.

“Over the last few days, after the rounds, I worked on my putting because I was struggling with that,” said Borovilos. “Last night, I was able to get a good feel for my putts; I changed my setup a little bit, so today, I was able to go out there and I felt confident that I could get every putt to the hole and on line. Also, on the par 5s I was pretty aggressive with my second shots, so I gave myself good looks.”

Having not been among the leaders entering the round relieved the Etobicoke, Ont., native of any underlying pressure, but she says that didn’t change her mentality going into the day.

“Whether I’m close to the leaderboard or down at the bottom, I still want to play well; I’m still trying to do my best. Today, I just got everything to work so it was a good day,” said Borovilos.

Bentley Cotton, out of Austin, Tx., carded her best round of the week, a one-under par 71. After a blistering hot start, the University of Texas Longhorn cooled off, but still managed to put herself in a favourable position entering the final round.

The 21-year-old was five-under through a five-hole stretch, from holes No. 5-9, including an eagle on the par-4 8th. Cotton bombed her drive, which settled just short of the green, before knocking in a lengthy putt to get into the red numbers.

“That’s a bonus, you know, you’re just trying to make birdie. [I] made bogey on three, no four; I kind of got a tough break in the rough, was in a divot and came away with bogey but then just got it going. [I] started rolling the putts and hitting it close,” said Cotton.

Cotton, who plays with Team Canada’s Brigitte Thibault at the University of Texas, says it’s her first time in Canada and it’s been, well, great.

“Canadian Am, great tradition […] Everything is run very well, great points for the WAGR (World Amateur Golf Rankings), great people and obviously a great course in great conditions. I’m excited to be here,” said the American. “I love it,” she said about Canada as a whole. “Everything is just unbelievable, overall just a great experience.”

Alissa Xu continues to hold onto second place after a three-over par 76. Katherine Muzi, Lion Higo and the aforementioned Cotton are T3 and sit at +2 for the tournament.

The final round is scheduled to begin at 7:30 a.m., with the leaders teeing off at 9:30 a.m. An awards ceremony will follow the conclusion of play on Friday.