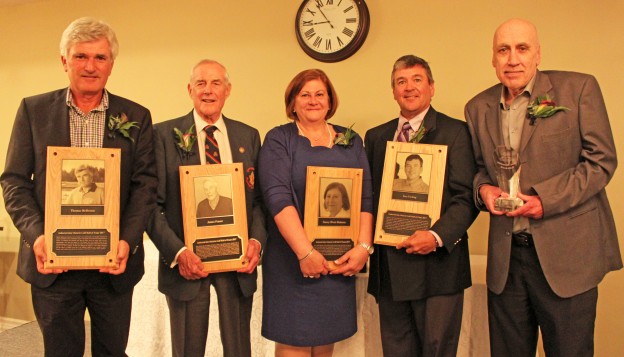 The annual Ontario Golf Hall of Fame ceremony was held on May 3, from Wooden Sticks Golf Course in Uxbridge. This year, four deserving inductees entered the Hall and one member of the Ontario golf media was honoured with the Lorne Rubenstein Media Award.

“I wish to extend my congratulations and those of Golf Ontario’s board members, staff and volunteers to this truly deserving group of inductees,” said Golf Ontario President John Gallinger as he welcomed those in attendance. “Whether as a Builder, Amateur or Professional, all of tonight’s inductees have shown extraordinary contributions to the game at the provincial, national or international levels.”

The evening began with the presentation of the Lorne Rubenstein Media Award, an award that recognizes major contributions to golf in Ontario and is named after Ontario Golf Hall of Famer and one of Canada’s best known golf journalists: Lorne Rubenstein. This year the award was given to Ian Hutchinson. Hutchinson’s career has spanned over 35 years and seen him cover a variety of sports. However, he eventually specialized in golf and it is because of those contributions he was named the 2017 Lorne Rubenstein Media Award winner.

“What a prestigious award to win. I said to Lorne that he set the bar for us, not only in standards of writing but in the way he conducts himself. He is always willing to talk and help out his colleagues,” said Hutchinson. “I looked at the past winners of this award and what a great lineup of golf writers to be joining!”

The first inductee to join the Hall was Oakville’s James Fraser. Fraser entered the Hall in the Builder category after an impressive career that saw him involved in numerous areas within the sport. Fraser held multiple roles around rules but also served associations provincially (in both Ontario and Quebec) along with nationally.

Fraser told the crowd about how he grew up with the game of golf and that once he started to attend events, he became interested in the rules side. Fraser followed that passion into the Hall of Fame career that he now possesses.

Port Carling ‘s Thomas McBroom also entered the Hall in the Builder category. McBroom, a well-known golf course architect has designed more than 60 courses in Canada and even more internationally. Many of his designs have been recognized on top lists nationally and internationally.

“I am obviously thrilled to be here tonight and to have so many good friends and good clients here,” said McBroom. “I thank you all for your support of the years. I have had a great career in golf and am happy to have been part of a great period where golf expanded.”

Tarling thanked those in attendance for their involvement in his career and told them about how he became a professional. “Originally I wanted to be a head professional because I thought that was the life. It wasn’t until a Golf Ontario (Ontario Golf Association) camp where Ontario Golf Hall of Famer Sam Young said to me ‘I think you should try to become a tour player.’ He saw something in me and that changed my entire outlook.”

The final inductee of the evening was Stacey (West) Mahoney. Now living in Cary, North Carolina, Mahoney entered the Hall in the Amateur category. Mahoney had a tremendous junior career, which saw her win three Ontario Junior Girls’ titles, three Canadian Junior Girls Championships and the 1979 Canadian Ladies’ Amateur Championship in addition to the numerous team honours she received.

“I have been really lucky. I have been to every province in Canada, probably half of the states in the U.S., England, Australia and Fiji in my golf career on provincial and national teams,” said Mahoney.

With that the 2017 Ontario Golf Hall of Fame ceremony concluded and the inductees officially joined the other members of the Hall.

Golf Ontario would like to congratulate all of the inductees and thank all those who attended, including Golf Ontario partners who make events like the Ontario Golf Hall of Fame possible. Also, a big thank you to Wooden Sticks for their continued support in hosting the ceremony and housing the Ontario Golf Hall of Fame. Thanks as well to TSN’s Mark Zecchino for emceeing the event.