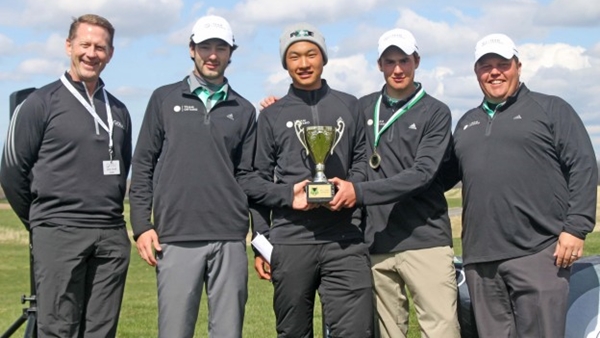 NIAGARA FALLS, Ont. — While the golfers needed to brave chilly conditions and tackle challenging winds, the Golf Association of Ontario’s (GAO) inaugural Team Ontario Cup turned out to be a great success. The event, held April 24-26 at the Grand Niagara Golf Club in Thorold, concluded with both the boys’ and girls’ Team Ontario 1 teams capturing the trophies.

The GAO’s Team Ontario along with five Regional teams (Ottawa, York, Waterloo, Niagara and Essex-Kent) all took part in the two-round, team-format event. Team Ontario entered two teams on both the boys’ and girls’ side, while the Regional teams entered two teams of four boys and one team of four girls with the low three scores for each of the two rounds counting towards the team’s total gross score.

The eventual winners, Team Ontario 1 were comprised of Unionville’s Max Sear, Thornhill’s Jason Chung and London’s Jackson Bowery. As for the girls, Team Ontario 1 was made up of Richmond Hill’s Monet Chun, Ruthven’s Alyssa Getty and Ridgeway’s Madeline Marck-Sherk.

In addition to the team championship, the event also recognized the low individuals in three categories: Overall, Juvenile and Bantam. On the boys’ side, the Overall Champion was Sear. The 17-year-old came out blazing during the opening round firing a -10 (62). He finished his second round +2 (74) but still captured the title by seven shots. The Juvenile boys’ division was shared by Chung and Team Ottawa member and Long Sault resident Ty Celone. Both golfers posted similar scores with opening rounds at even-par (72) and -1 (71) second rounds. Taking the Bantam division was Team York member and Whitby resident Brendan Dunphy. Dunphy finished the tournament +9 after rounds of 75 and 78.

After round one, the talk on the girls’ side was on Chloe Currie, as the Port Credit native finished with a -3 (69) and held the lead. Her performance also helped Team Ontario 2 hold the team lead heading into the final round. However, a 79 during round two opened the door for Chun to not only capture individual honours, but help propel her team to the title. Chun, who finished the opening round at +1 (73), had an even-par (72) during round two to capture the Overall, Juvenile and Bantam championships.

In addition to the on course championship, the event also featured a banquet for the teams on Saturday night, at the Legends on the Niagara Golf Club, where each team presented their Most Valuable Contributor (MVC) award.