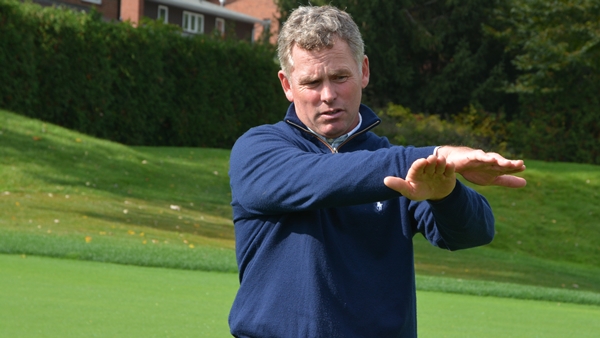 Keith Bartlett thought there was a day in the future that he’d have to deal with the problems plaguing his course’s greens. He just didn’t know how quickly that day would come.

Bartlett, superintendent at St. George’s Golf and Country Club in Toronto, recognized his club’s problem in the late winter. Core samples of grass from the club’s greens didn’t come to life when grown indoors, and there was a decidedly nasty odor from the grass. It turns out a combination of factors—a lengthy and unseasonably long cold snap, ice and other circumstances—put undue pressure on the short grass that serves as a putting service for thousands of golfers each year. That grass was dead, leading Bartlett and other superintendents from across Ontario to seek out a way to deal with one of the biggest catastrophes to hit golf clubs in the province in decades.

“It was a real mess,” says Bartlett, sitting in a golf cart near the clubhouse at St. George’s in Toronto’s west end. “But it helped us move forward with something I’m not sure we’d ever have gotten done otherwise.”

In the case of St. George’s, the prestigious private club elected to make a bold move, rebuilding all 18 holes on its Stanley Thompson–designed course. But it was only one of numerous clubs in Ontario that faced tough decisions as courses came out of the cold to find their Poa Annua greens—annual bluegrass in colloquial terms—dead and brown. Usually there’s some winterkill, but no one in the industry recalls such a widespread issue in the last 50 years.

The problem captured attention from across Ontario’s media, with print and television broadcasters putting the spotlight on courses with dead grass. The cold didn’t discriminate based on a course’s rating or the fees it charged players. If a course had Poa Annua greens—common at most older facilities—it faced some degree of damage from the winter, often with swaths of dead grass. Newer facilities typically have more resilient bentgrass greens, a more modern grass that isn’t nearly as easily damaged by ice and cold and is more environmentally sustainable, which explains why in some areas of the province one course would have extensively damaged putting surfaces, while a nearby club didn’t have any problems.

At its worst, some of the country’s most venerable clubs like St. George’s or Hamilton Golf and Country Club in Ancaster, Ont., or London Hunt and Country Club, which hosted this year’s Canadian Pacific Women’s Open, lost a majority of their putting surfaces.

Owen Russell at Markland Woods, a private club in Toronto, was one of the first to recognize his club’s issue.

“The toughest thing was to admit they were dead,” he says. “You sort of had to come clean, recognize the situation and move ahead with a plan.”

In his situation, 14 of 19 greens (the club has an extra hole) were damaged beyond repair. With the Toronto Star Amateur on the schedule, the club had to react quickly. He was able to find bentgrass sod that was left over from another golf course project and put it down on his greens on April 25. Unlike some other clubs, Markland Woods had the proper soil to support bentgrass. Other clubs weren’t as lucky and had to spend millions stripping the soil from their greens and entirely rebuilding them.

The new greens grew in rapidly and club members were anxious to get out and play. But Russell held them off until he knew the greens could withstand traffic. He opened them on June 6. The club used the change to bentgrass to sell new memberships based on the fact it shouldn’t lose playing days to dead grass in the future, Russell says.

“We turned what could have been a real mess into a positive for the club,” he says.

However, dead grass on golf greens wasn’t limited to private clubs. Ontario’s nasty winter wasn’t discerning when it came to killing Poa. Public golf courses from Mississauga’s famed Lakeview Golf Club to Victoria Park East in Guelph had similar issues without the ability to prop up their finances with annual dues from members.

David DeCorso’s course, Victoria Park East, opened with three complete temporary putting surfaces and nine greens with significant issues. Due to a colder than usual spring, it took until July for the greens to start to return, though DeCorso says they never fully recovered. And the lackluster conditions meant the club couldn’t charge golfers full fare for much of the year, hitting the club’s bottom line as well.

“A lot of golfers didn’t start playing until June anyway because the spring was lousy,” DeCorso says. “And when the greens did come back they were fine, but the worst spots are weak and there are certainly some concerns going into the spring.”

That’s Rhod Trainor’s concern as well. The longtime superintendent at Hamilton Golf and Country Club, Trainor’s club didn’t open any of its greens until July.

Hamilton, which has 27 holes covered with Poa, remained shut until July as Trainor attempted to bring the greens back to life through a process of aerating and slit-seeding with bentgrass.

Trainor wasn’t alone. Most Ontario superintendents turned to overseeding with bentgrass to repair the damaged greens. The bentgrass rapidly filled in the dead areas, but didn’t do well in areas where sunlight and airflow is limited by trees. That means most Ontario superintendents are promoting a plan of judicious tree removal, something that’s been very misunderstood despite an educational push by many clubs and the United States Golf Association, one of the sport’s governing bodies.

Trainor, who plans to remove hundreds of trees around the club’s greens to create a better growing environment, says it is something he should have done years ago.

“I’m part of the problem because I didn’t tackle the issue a long time ago,” he says.

Though he recognizes tree removal is a sore spot for many people, Trainor says trees have a place on courses—it is just away from areas where they shade greens.

Trainor says golfers who, at one time, couldn’t understand why greens wouldn’t grow under the canopy of trees, now have a much better sense of the issues facing courses.

“I think the education of members, by people like the [United States Golf Association] has really broadened,” he says. “And I think people have seen the success courses have had following tree removal.”

Bartlett’s overhaul took 58 days. In that time the club rebuilt and seeded all of the new greens. He credits the club’s support for the project to the educational tours he did of the course starting in 2013. During those tours he tried to explain to members the struggles the grass had because of the trees, and the need to move forward with bentgrass. He also articulated the fact that bentgrass needed a sandy, well-drained base, which meant the greens would have to be completely rebuilt.

“The success of the project was based on the fact I’d been educating the members for some time,” he says.

For those who see the overhaul as an unnecessary extravagance, Bartlett says there are huge environmental and financial benefits to using the new grass. Bentgrass takes less water—a key issue facing all clubs—is more disease resistant and requires less fertilizer and pesticides than Poa, he adds.

“Even our operating budget will come down slightly,” he says. “And the experience will be better for every member.”

What about the naysayers who claim Poa will soon take over the club’s new greens? Bartlett scoffs, saying the club has created an appropriate growing environment for bentgrass to flourish.

“I’ll be long gone and retired before anyone has to deal with this again,” Bartlett, 48, says. “We’ve set the club up to be more sustainable. I think in time almost every club will follow.”

A bestselling author of five books, and golf columnist for Global News and Global Golf Post, Robert Thompson has chased a little white ball all over the world. He was commissioned to write this feature for the Ontario Golf Superintendents Association. For more information contact Phil Scully, President of the OGSA, at pscully@granitegolfclub.ca.