From one head coach to another 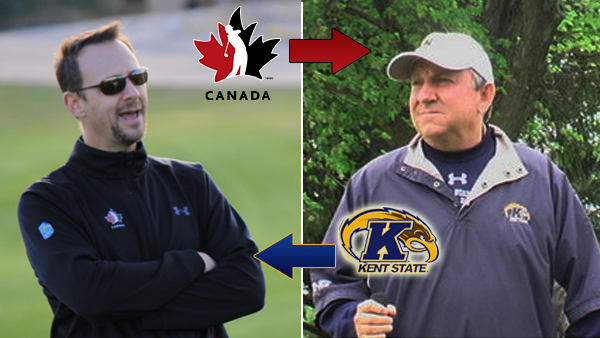 Success on the golf course comes in many forms – birdies, eagles, up-and-downs, par saves etc. Success off the golf course, however, isn’t as easy to measure.

The young athletes of Canada’s National Amateur team are required to balance the mental stresses of competitive golf along with busy post-secondary schedules.

To give a better perspective, National Team members take about 10,000 golf swings a week during practice alone. Adding to that, a normal college workload averages 20 hours of in-class lectures in addition to the countless hours needed for studying and travelling to competitions.

Needless to say, a strong support staff is essential to full development.

Coaching staffs include head & assistant coaches, sport psychologists, nutritionists and strength & conditioning experts. They are in place to provide the athletes with as much help as possible.

So… How does the connection work between NCAA coaches and National Team coaches?

Herb Page, Kent State’s Director of Golf and a Markham, Ont. native, explained why he has worked with many of the Canadian National Team amateurs in the past and why they have succeeded.

“Derek (Ingram) and I communicate on a lot of things – basically, we don’t mess with Corey Conners or Taylor Pendrith’s golf swings,” said the Ontario Golf Hall of Fame member. “If we do feel like a change needs to be made, I tell Derek and if he agrees we talk back and forth about it.”

In most cases, the National Amateur Team athletes are away at school for nine months before travelling back to Canada for the summer. Page discussed the difficulty of balancing the busy school schedules of the athletes and joked about being envious of Team Canada’s summer months with the players.

“When I have them at school here, they are really busy with academics, weight training five days a week, practicing and the weather isn’t always ideal,” he said. “I think Team Canada has it made!”

Kent State University, located in Northeast Ohio, is no stranger to cold weather either. Oddly enough, this could be one of the reasons why many Canadians have landed at Kent State in the past. Currently, there are five Canucks (two men, three women) in the Kent State golf program – four of which are on Team Canada. The Golden Flashes alumni class features many Canadians, including 2013 PGA Tour Canada Order of Merit Champion, Mackenzie Hughes of Dundas, Ont.

Seven out of the 10 athletes on the men’s and women’s amateur team are a part of NCAA programs in the United States. Derek Ingram, Head Coach of the Men’s National team, explained how it all works from his perspective.

“I will spend 60-80 days with players, sometimes at college but the majority coming in the summer season,” said the Winnipeg native. “Going back the other way I provide feedback to the college coaches after the summer season ends – it goes both ways. It has worked really, really well for all of us.”

Take Taylor Pendrith for instance, who joined both the National Amateur team and Kent State for the 2013 season.

“I wasn’t highly recruited when I was a junior. Coach Page came and watched me up in Owen Sound and we set up a visit. After that, I knew Kent State was going to be the best place for me. I cancelled all my next visits to other NCAA schools.”

“Both of them (Herb and Derek) have been unbelievable coaches who communicate with each other and understand my game. Having coaches all year round who can help you with your game is a huge advantage.”

Pendrith has shot up the World Amateur Golf Rankings (WAGR) since joining both programs – the 2013 Porter Cup Champion currently sits at No. 33.

Coach Page has truly enjoyed having both Pendrith and Conners in his men’s program. He went on to say they were “dreams” and are “destined for really great things.”

Ingram agrees with Page and touches on their goal of working together to achieve the same result.

“We’ve built these relationships and friendships so we can maximize both their program and our program. It’s really a win-win situation for the players, NCAA schools and Golf Canada.”